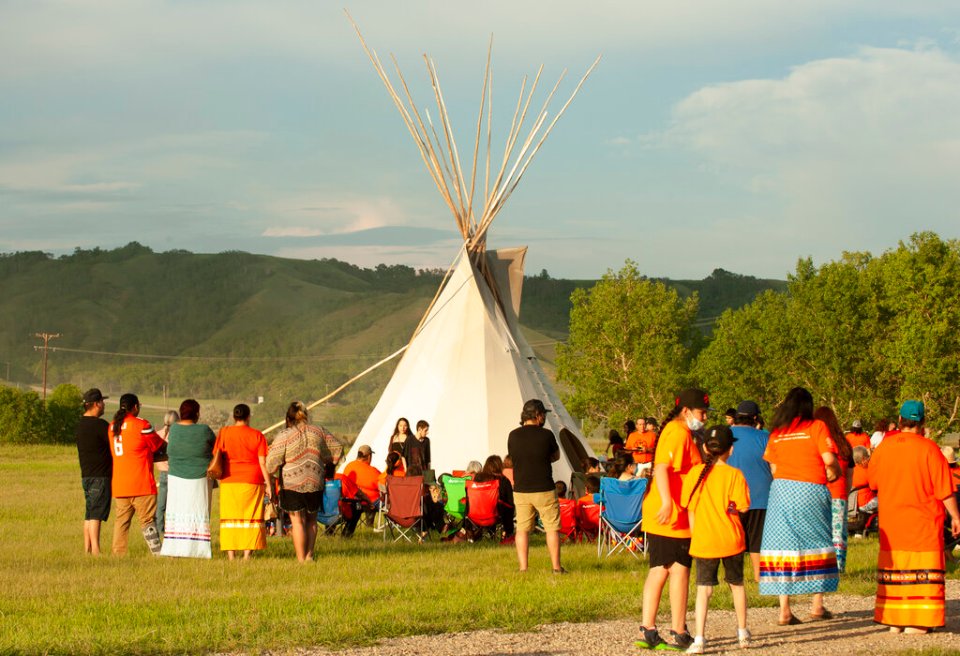 The Canadian indigenous group that discovered some 750 unmarked graves near a former residential school last month has announced the takeover of its own child welfare services under a deal with the federal government.

The agreement, declared in a Tuesday event in the western Canadian province of Saskatchewan, marks the first time in 70 years that the community will have control over child and family services among its members.

Canada for decades separated indigenous children from their families to place them in foster care. Eighty percent of children in foster care homes across Saskatchewan are Indigenous, according to a 2018 report.

The accord was announced in a ceremony attended by Prime Minister Justin Trudeau, Cowessess Chief Cadmus Delorme, and Saskatchewan Premier Scott Moe.

It is the first such agreement under a 2019 law meant to give indigenous groups more control over child welfare in their communities. Cowessess First Nation passed an act intended to do that in March 2020.

“Our goal is, one day, there will be no children in care,” Delorme said during an address at the event. “We have a lot of work to do.”

Trudeau said at the event that his administration was in talks with other First Nations on similar deals. Government spokespeople, however, did not confirm whether Ottawa would continue to fund the First Nations’ child and family services cost going forward.

The announcement came at a time when Canada is reeling from the discoveries of more than 1,000 unmarked graves at the sites of former residential schools — many of them believed to be children — marking a grim reminder of abuses suffered by indigenous communities for generations amid their struggle for justice.
For 165 years and as recently as 1996, Canada’s residential school system separated children from their families and sent them to boarding schools where they were malnourished, beaten, and sexually abused in what the country’s Truth and Reconciliation Commission called “cultural genocide” in 2015.

READ ALSO:  American IT firm Kaseya says it has been hit by a cyber-attack

The Canadian government was in court last month challenging a Human Rights Tribunal ruling that would have made Ottawa individually compensate children and families harmed by what federal officials admit is a discriminatory child and family services system. A federal court ruling is pending.

The announcement may not improve things for Cowessess children, however, if the circumstances of their families’ lives do not change as well, said Cindy Blackstock, a member of Gitxsan First Nation and executive director of the First Nations Child and Family Caring Society, which is taking the government to court over the system. That would require better funding for services such as housing, she emphasized.

Meanwhile, Canada on Tuesday named Mary Simon as its first indigenous governor general — Queen Elizabeth II’s official representative in the Commonwealth country — amid the country’s reckoning with its colonial history.

Trudeau announced the appointment of the former ambassador, journalist, and Inuit community activist to the largely ceremonial post that serves as the representative in Canada of its head of state, the British monarch.

“We are honored to have Ms. Simon as Canada’s first indigenous governor-general,” Trudeau said. The queen’s Twitter account said she had approved the appointment on the prime minister’s recommendation.

“We need to fully recognize and memorialize and come to terms with the atrocities of our collective past that we are learning more about each day,” Simon told reporters on Tuesday.

“My appointment comes at an especially reflective and dynamic time in our shared history,” she added. “I will work every day towards promoting healing and wellness across Canadian society.”

The governor-general performs functions such as swearing-in governments and formally signing legislation, but is also the commander-in-chief of the military and can summon or dissolve Parliament.

“This is truly a historic day, especially given the heightened discussion around working towards meaningful reconciliation between colonial governments and first peoples,” said Jerry Daniels, grand chief of the Southern Chiefs’ Organization, which represents 34 First Nations groups in Manitoba.

Payette’s sudden departure reignited a debate about the role of the monarchy in Canada, with slightly more than half of the respondents in recent polls favoring abolishing the position of governor-general.

The supreme court chief justice had taken over the mostly ceremonial role in the interim.
The discovery of more than 1,000 unmarked graves at former indigenous residential schools has convulsed Canada, provoking anger and grief in indigenous communities.

More than a dozen churches across Canada have been burned in recent weeks, and statues of Britain’s Queen Elizabeth II and Queen Victoria — who reigned over the country when the first residential schools were opened in the late 1800s — were torn down by protesters.