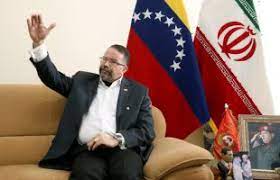 The direct flights between Iran and Venezuela will start on 18 June, the Iranian envoy to Caracas said, adding that no visa will be needed for traveling to the Latin American country.

Speaking on the IRIB TV program on Saturday night, the Iranian Ambassador to Venezuela Hojjatollah Soltani hailed that political relations between Tehran and Caracas are at the best possible level.

Referring to the strong will of President Raeisi’s administration to strengthen and expand cooperation with Venezuela, Soltani said that so far, the countries’ relations have expanded in various fields and are moving forward.

READ ALSO: Putin compare self to Peter the Great, Russia to destroy all of Donbas

He also referred to the emphasis of the Leader of the Islamic Revolution on strategic relations between Iran and Latin America, saying that Latin America is a perfect and suitable region for Iran’s activities in political, cultural, and economic arenas.

Elsewhere in his remarks, the Iranian ambassador said that direct flights between Tehran and Caracas will start next week on June 18.

According to him, Iranians will not need to get a visa to travel to this Latin American country.

According to a report, A Venezuelan official says direct flights between Tehran and Caracas will start on March 21, taking Iranian tourists, businessmen, and industrialists to the Venezuelan capital and bringing them back to the Iranian capital.

Ramón Velázquez, the Venezuelan vice-minister for air transport and president of the state-owned Venezuelan airline Conviasa, made the announcement in an exclusive interview with Iran’s Spanish-language news network HispanTV on Sunday.

“We are going to have long-haul flights that can directly take passengers from Tehran to Caracas and bring them back from Caracas to Tehran,” he noted.

To pave the way for the development, as many as 50 Iranian tour operators are slated to travel to Venezuela on March 2 to get to know about the Latin American country’s tourist attractions and other potentials.

Velázquez added that the flight was to last for nearly 13 hours and was scheduled to take off from the Iranian capital in the evening.

Iran and Venezuela started exchanging direct cargo flights in 2019, carrying “medicines as well as industrial and technological products,” he said.

According to the official, these flights not only help enable the commercial exchange of products between the two countries but also strengthen relations in the tourist and cultural spheres, where the “true union and strength” of the two peoples are rooted.

Iran and Venezuela have been cooperating closely, despite the United States sanctions targeting both countries.

Starting in 2020, Iran has so far sent several massive shipments of gasoline to Venezuela, whose oil industry has been hit hard by the American sanctions.

Velázquez told Hispan TV that Iran was an example for Venezuela “for everything it has done in the 43 years” since the 1979 victory of its Islamic Revolution.

Iran is as well “an example for [all] the countries that have been sanctioned of how a country, regardless of the sanctions’ pressure, can develop, grow, and show the world that sanctions can be defeated, when there exists the desire and will to do the things that are right for one’s country,” he concluded.