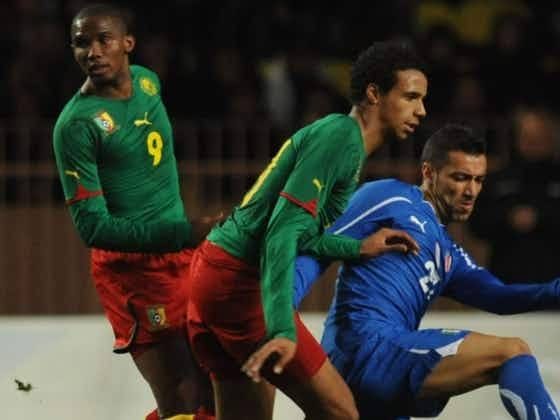 ‘We don’t tolerate people who think they are Special’ – Eto’o will make sure Matip does not go to the World Cup.

Matip was a key member of the Indomitable Lions and even represented Cameroon at the 2014 FIFA World Cup in Brazil.

The 30-year-old was born in Bochum, Germany and about five years ago opted not to play for Cameroon again.
Since 2017, Matip left the national team to concentrate on his career with Premier League giants Liverpool.

Eto’o and Matip
Speaking to the Sportsmail in 2017, Matip said, “It’s done now and I’m looking to the future.”

“I only wanted to stay here and play. It was not easy because I didn’t understand what was going on. Now the problem is solved and I can concentrate on Liverpool.”

“No. I tried to play there and represent my country, do my best, and achieve something but all the surrounding things were not the best to do this.”
The Indomitable Lions will represent Africa at the world football festival and preparations are already ongoing.

Eto’o is the President of the Cameroonian Football Federation (FECAFOOT) and has already given a verdict about the return of Matip.

READ ALSO:  He has had a life of ups and downs’- Vincent Kompany reveals the different sides to former teammate

Speaking about the possible return of Matip, Eto’o said, “This is a national team. We don’t tolerate people who think they are the special ones. Who only want to be with us when they see honey and fruitfulness.

“We worked hard alone, and we have big respect for players who honor this nation in bad and good times.

“I myself had been on the best teams in Europe, but I have never undermined playing for the Lions.
“I think Matip’s time is over, he must permanently stay in Liverpool. Those who started this job, will finish it in Qatar.

“It doesn’t matter who they are, but they are going to Qatar to enjoy the fruits of qualifying. No one will eat their fruits of success, but them.”