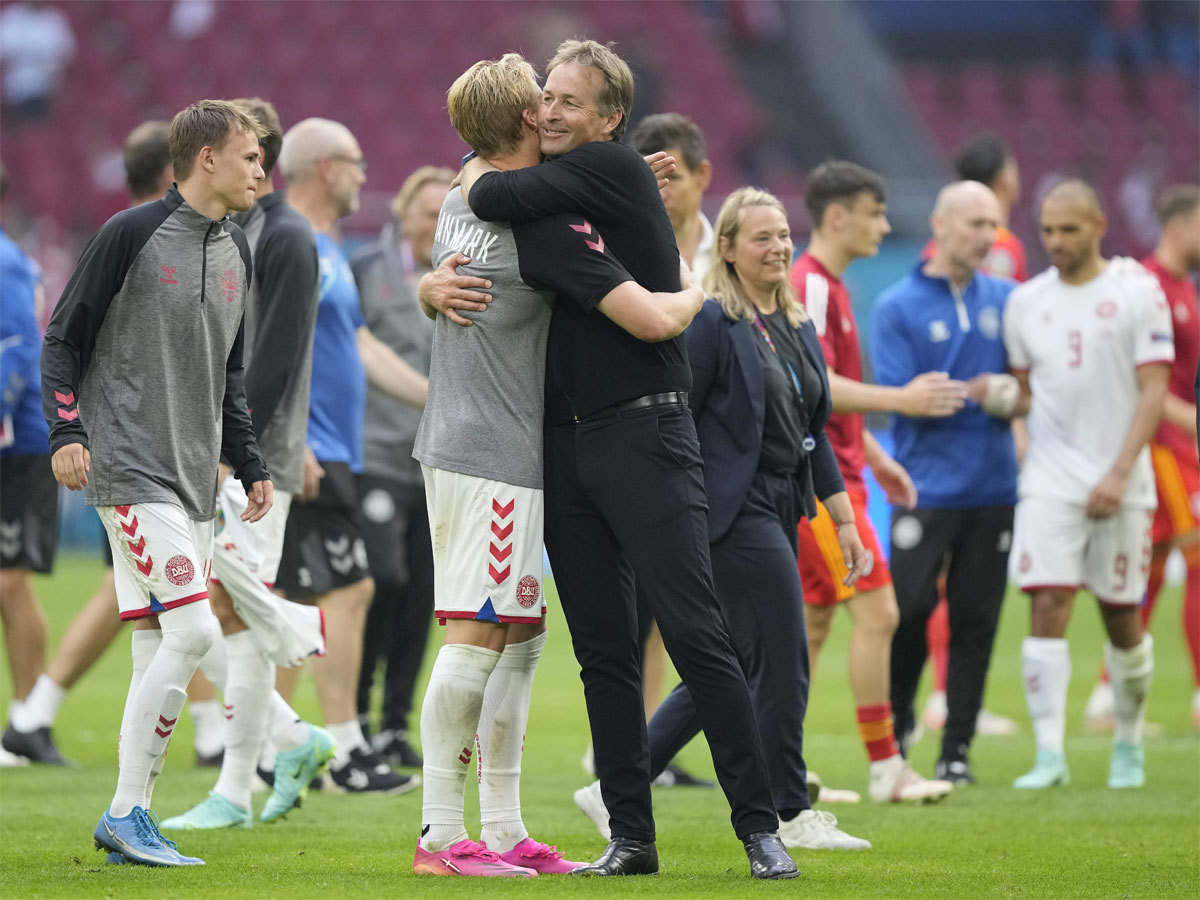 Martin Braithwaite is cradled by teammate Andreas Cornelius after scoring Denmark’s fourth goal against Wales Could a tournament that started so awfully end in unlikely glory for Denmark?

That romantic notion is beginning to look like a genuine possibility after Kasper Hjulmand’s team tore apart Wales 4-0 on Saturday to reach the quarter-finals of Euro 2020.

Football could not have seemed less important when Christian Eriksen suffered cardiac arrest during their opening game against Finland in Copenhagen, which they went on to lose 1-0.

But the Danes have been carried by a wave of emotion from that moment and, after scraping out of the group stage, in Amsterdam –- where Eriksen made his name with Ajax -– they recorded one of the biggest ever victories in the European Championship knockout rounds.

Almost everyone in the 14,645 crowds allowed inside the Johan Cruyff Arena was Danish, while back home fans celebrated on the streets in Copenhagen.

“Now we can go all the way” was the headline in tabloid Ekstra Bladet, looking forward to a quarter-final in Baku next weekend.

“One thing at a time,” said Hjulmand. “There is no need to think so far ahead but we believe in each other.”

Parallels can be drawn with 1992 when the Danes benefited from a ban on war-torn Yugoslavia to qualify for the Euro in Sweden and went on to win the trophy.

Saturday’s victory against Wales came on the anniversary of that triumph and this time, without Eriksen, it is clear Denmark still has an outstanding team driven by the desire to win for their stricken friend.

“We have been preparing for this for a long time. We believed in each other, we were optimistic, then Christian collapsed and that is where everything changed, for me at least,” Hjulmand said.

“I felt that we were put suddenly in a totally different situation. I am very grateful for all the support everyone has shown. We needed the love and support and that is what gave us wings.”

The quality is there: every member of their starting line-up against Wales plays in one of Europe’s big five leagues.

Against Wales the sense fate was on their side was epitomized by the match-winning role played by Kasper Dolberg.

The striker did not start a group game but was brought into the side with Yussuf Poulsen injured and scored the first two goals on the ground where -– like Eriksen -– he made his name with Ajax.

Dolberg, whose parents were handball players, emerged in Amsterdam when he scored 16 league goals for Ajax as a teenager in 2016/17, also featuring on their run to that season’s Europa League final.

A move to French club Nice for a reported 20 million euros ($23.9m) followed in 2019, but weeks later his watch –- worth many thousands of euros -– was stolen from the changing room by a teammate.

Dolberg also came into the delayed Euro after a season in which he just couldn’t catch a break.

Last September, while on international duty, the 23-year-old’s house was burgled and his car, a Porsche, was stolen.

A succession of injury problems followed. He contracted Covid-19 twice. Then, in February, he had to undergo surgery for appendicitis.

He returned to finish the season but did not come into the Euro in great form. On Saturday he truly rediscovered his scoring touch.

“I think we have a star striker in Kasper. I watched him when he was a kid and he had that season when he scored 16 goals for Ajax,” said Hjulmand.

“He did have some problematic phases with injuries and catching Covid but he bounced back,” added the coach, who himself would not have been in charge had the Euro not been postponed for a year.

“The boys are warriors and I admire them. It is a beautiful game but I know everyone is fighting and being in the quarter-finals now is amazing.”