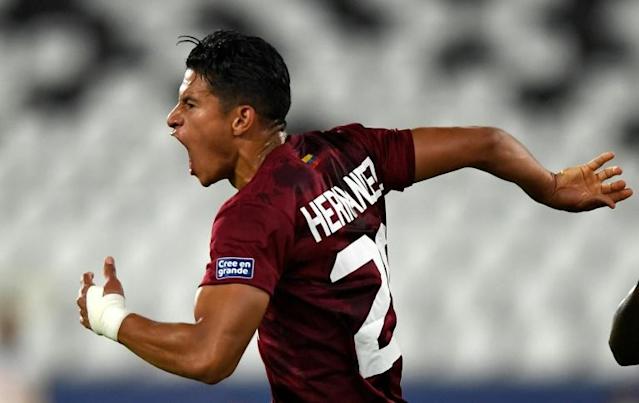 Peru’s players celebrate after Colombia’s Yerry Mina (2nd left) scored an unfortunate own goal that won the game Ronald Hernandez scored an injury-time equalizer to earn minnows Venezuela a share of the spoils in a 2-2 draw with Ecuador at the Copa America on Sunday.

Ecuador twice took the lead through Ayrton Preciado and Gonzalo Plata on either side of a powerful headed goal from Venezuela’s Edson Castillo.

It was a remarkable achievement for a team still missing 12 players due to testing positive for Covid-19 or injury.

“I have no words to describe my admiration for these lads,” said Venezuela’s coach Jose Peseiro.
“The way they played for the first time in the professional team, they’re here showing an ability to sacrifice, to fight, to defend the Burgundy (jersey), which excites me.”

The point left Ecuador bottom of the five-team group on one point, with Venezuela a place and a point above them after having played a game more.

Hosts Brazil leads the group with a perfect two wins from two ahead of Colombia, who lost 2-1 to third-placed Peru in Goiania.

Ecuador was off to a bright start with both Leonardo Campana and Enner Valencia shooting narrowly wide from good scoring positions.

Cristian Casseres was Venezuela’s main threat but he skied one great chance from 12 yards out, before breaking the offside trap and seeing his chip over goalkeeper Pedro Ortiz cleared off the line by Pedro Hincapie.
The deadlock was broken in scrappy circumstances six minutes before halftime.

Pervis Estupinan sent a freekick into the box that Campana won in the air, causing havoc before Preciado stabbed home the loose ball after it ricocheted off goalkeeper Wuilker Farinez.

Venezuela were level, though, just six minutes into the second half when Castillo rose unmarked eight yards out to plant a bullet header from Jose Martinez’s cross into the top corner, leaving Ortiz rooted to his line.

Three minutes later, Farinez got down quickly to save a header from Campana as Ecuador looked to hit back immediately.

They did move back in front 19 minutes from time after a length of the field counter-attack from a Venezuela corner.

Plata ran from one box to the other with the ball and although Farinez saved his tired effort, Christian Noboa’s follow-up ricocheted back to him off a back-tracking defender and Plata poked home.

Soon after, captain Valencia had a chance to wrap things up but shot wide with only Farinez to beat.

After his earlier heroics, Plata was at fault for Venezuela’s equalizer, caught out of position as Hernandez ran past him to head Edson Castillo’s long ball into the box past a stranded Ortiz.

“These lapses in concentration are costing us points, but we have to keep pushing knowing this is the (right) path,” said Ecuador’s coach Gustavo Alfaro.

Peru bounced back from their opening 4-0 defeat to Brazil to stun Colombia 2-1 thanks to a Yerry Mina own goal.
Sergio Pena gave Peru a first-half lead but Miguel Borja equalized from the penalty spot early in the second period.

However, Mina inadvertently bundled the ball past goalkeeper David Ospina from a corner to hand Peru victory.

Colombia were in the ascendancy early on but Juan Cuadrado lashed over and Borja’s shot was deflected inches past the post.

Peru took the lead on 17 minutes as Yoshimar Yotun took aim from almost 30 yards out to the left, and when his stunning shot came back off the far post, the ball fell kindly to Pena to drill home.

Colombia were given a lifeline early in the second half when Borja got in behind Peru’s defense only to be brought down in the penalty area by a rash challenge from goalkeeper Pedro Gallese.

Borja made no mistake from 12 yards, sending Gallese, who was booked for his challenge, the wrong way on 53 minutes.

Yet 10 minutes later Peru were back in front as Colombia’s giant center-back Mina deflected a Christian Cueva corner into his own net with his chest.