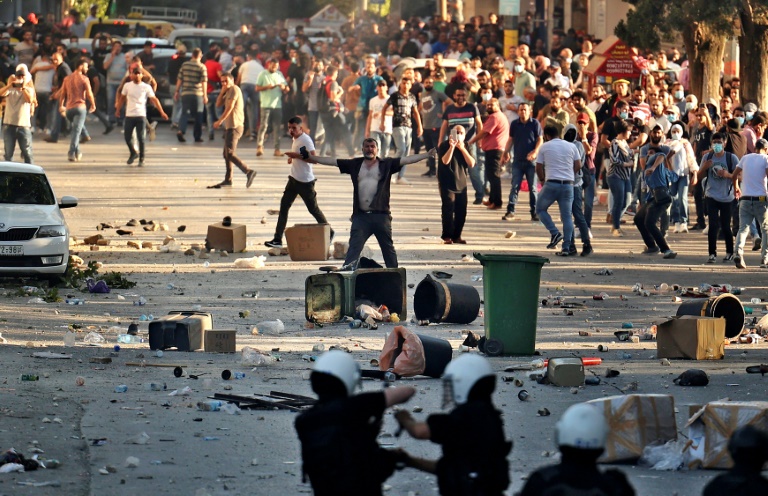 Palestinian security forces have clashed with thousands of people in the occupied West Bank protesting the death of an outspoken critic of President Mahmoud Abbas in custody.

The Palestinian Authority deployed security forces to confront the angry protesters, who had taken to the streets of Ramallah.

The demonstrators called for the resignation of Abbas and accused his administration of killing Nizar Banat as they carried Palestinian flags and signs demanding “the fall of the regime”.

“We want a Palestine that protects the rights of its people. Our right to protest is a guaranteed right, our right to live is also guaranteed, the right to have public security is also in the constitution,” Tala Shbita, a protester, said.
“This protest is a continuation of the protests after the assassination of the martyr Nizar Banat, who was killed by the Palestinian forces,” Esmat Mansour, another protester, said.

“We want an investigative committee not led by a minister, who is in a government that is accused of killing him. Also, the killing of Banat is the tip of the iceberg, it hides a mountain of corruption and the absence of elected organizations. We want a total political reform.”

Palestinian officers, some wearing riot gear clashed with the protesters. There were no official figures on how many people were arrested or injured.

Witnesses said the officers fired tear gas into the crowd and used clubs to hit unarmed demonstrators and several journalists.

Security forces in plainclothes also spread out among protesters as they marched from the center of Ramallah towards the presidential offices, and closed off the intersection leading to the area, forcing shops to close.

Video footage from the protest showed security forces dragging a protester across the road while beating him.
Protests were also held in the southern West Bank city of al-Khalil south of Jerusalem al-Quds, and al-Bireh city in the central West Bank.

Banat died on Thursday in custody.

Palestinian Authority forces broke into a relative’s house, where he was staying in the early hours of Thursday, and hit him repeatedly with a metal rod before arresting him, according to Banat’s family.

The family has accused Palestinian Authority security forces of killing Banat after beating him and taking him away while he was semi-conscious.

In videos he had posted on social media, Banat had repeatedly criticized the Palestinian Authority for corruption and its security coordination with the Israeli military in the West Bank.

He had also blasted Abbas over a short-lived COVID-19 vaccine exchange with the Israeli regime earlier this month and slammed his decision to postpone a long-delayed Palestinian election in May, for which he had registered as a parliamentary candidate.

The spokesman for Ramallah-based security services, Talal Dweikat, said the committee investigating Banat’s death had begun its work, calling on Palestinians to wait for the results.

Abbas and the Palestinian Authority, which exercises limited self-rule in the West Bank, rejected accusations of corruption.