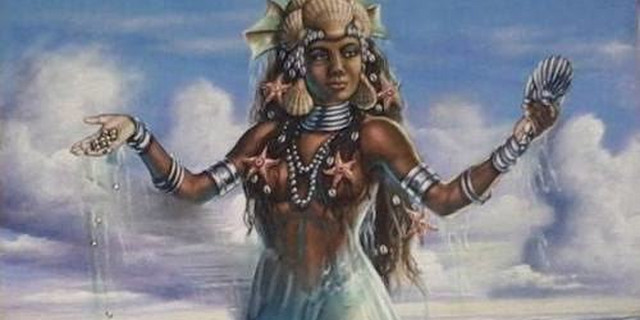 Normal people pass through them and are unperturbed but not the Ogbanjes.

Ogbanje means one who comes and goes, and they reincarnate through Nne Miri and Onabuluwa.

The Ogbanje phenomenon arises at these portals of entry. It is believed that people who are reincarnating make a contract with these deities and thus alter the life contract already made with Chukwu the supreme being and their chi (personal spirit or soul).

Professor of Guidance and Counselling at the University of Nigeria Nsukka, Chinwe Achebe, the wife of the famed Chinua Achebe wrote that Nne Miri or Mami Water is a “Supremely indulgent mother with the power to bestow riches, beauty, and ephemeral but phenomenal success in business, the performing arts” or give psychic powers.
However, the Mami Water does not give things freely, she interferes with the Ogbanje’s ability to form a strong or lasting relationship in marriage, or she gives the Ogbanje a short life span or gives her in marriage to one of her spirits.

The Ogbanje will have to make sacrifices and live-in allegiance to the Mami Water spirit.

It should be noted Ogbanjes always exist in groups.

Onabuluwa is “more crude, dramatic and coercive”. She convinces people to change their life contract.

If a woman’s destiny was for her to be married and have kids, Onabuluwa will renegotiate it for her to be a person of dazzling beauty who turns down men’s advances.

Ogbanjes are troublesome, short-tempered, and violent and usually threaten to die when they do not get their way. After a while, they do not remember their tantrums.

Some people have argued that the Ogbanje phenomenon is a type of psychiatric problem and personality disorder like schizophrenia. Some have said that it is a traditional illness that should be treated traditionally. Others have posited that it is sickle cell anemia.

It could be all the above, neither or one of them. What do you think?