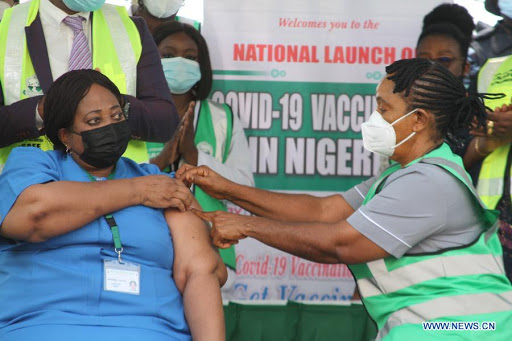 The Executive Director, NPHCDA, Dr. Faisal Shuaib, said this during a media briefing in Abuja on Tuesday.

Shuaib said the 440,000 health workers represented 23 percent of people that had received first the shot of the COVID-19 vaccine.

The NPHCDA boss also stated that 1,929,237 Nigerians representing 96 percent of the targeted population had so far been vaccinated against the virus, which had claimed over 3 million lives globally and over 2,000 lives in the country.

According to Shuaib, administering the second dose of the vaccine has begun and over 4,000 people have received theirs.

“Those individuals currently eligible for the second dose will have received their first dose 6 to 12 weeks ago,” he said.
He urges all Nigerians to receive their second dose of the vaccine to gain full protection against the virus.

He added that this would enable the country to achieve herd immunity against COVID-19, noting that the country had set an ambitious goal of vaccinating 40 percent of its over 200 million population before the end of 2021, and 70 percent by the end of 2022.

Meanwhile, Shuaib said the global community was facing great challenges regarding vaccine supply, adding that like most nations, this impacts the clarity over Nigeria’s next shipment.

“While we have information that we may get the next consignment of vaccines by end of July or August, this has not been officially confirmed.

“When we are able to, we will provide an update regarding timelines and details of the next shipment.

“At present, we do not have that information available due to the wider context we are in,” he said.

“Johnson & Johnson also announced it has signed a deal to provide 200 million doses of its vaccine to COVAX,” he explained.

According to him, the International Monetary Fund (IMF) is now advocating for a 50 billion dollar fund to be spent on ensuring a faster rollout of COVID-19 vaccines globally.

He said the IMF also called for at least 40 percent of the global population to be vaccinated by the end of this year, and 60 percent by June 2022.
He noted that the money would be used to increase COVAX vaccine coverage, procure additional tests and expand vaccine production capacity.

“We strongly endorse the creation of such a fund and emphasize that all nations must have comparable access to COVID-19 vaccines in order to end this pandemic.

“Additionally, the United States announced it will donate 20 million vaccine doses by the end of June to the COVAX scheme,” he added.

Speaking at the briefing, a representative of the United Nations Children Fund (UNICEF) in Nigeria, Dr. Peter Hawkins, said there were ongoing efforts to get vaccines to hard-to-reach areas in the country.

“Nobody is safe until everybody is vaccinated. We can not underestimate the steps taken and the challenges ahead,” Mr. Hawkins said.

He also urged governors, traditions, and other leaders to encourage their people to come out and be vaccinated for the safety of all.