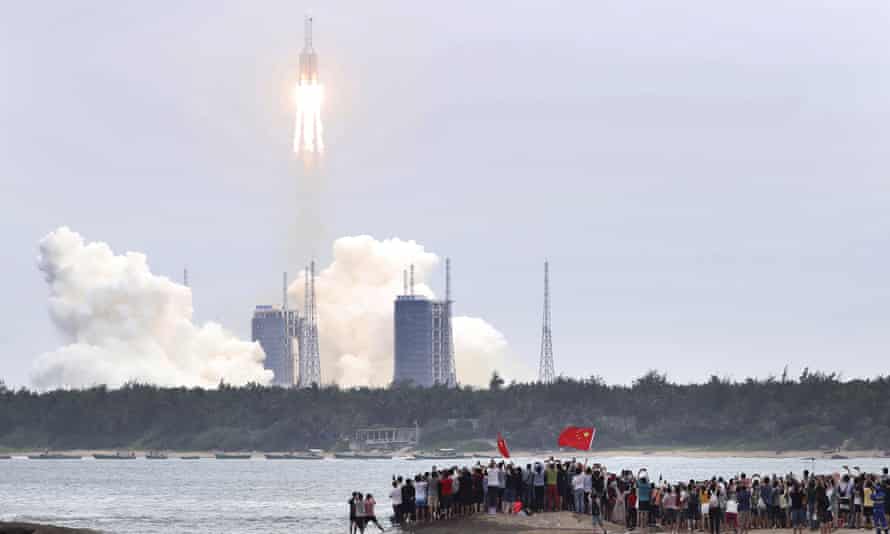 For a week, China’s Long March 5B grabbed global attention, as space agencies and experts closely tracked its trajectory, speculating where debris would fall upon the rocket’s uncontrolled reentry.

In China, however, the country’s space administration stayed silent for days amid criticism that allowing such a large rocket stage to free fall towards Earth was irresponsible and posed a safety risk — albeit a small one — to many countries.

Finally, on Sunday morning Beijing time the China Manned Space Engineering Office broke its silence, confirming the remnants of the rocket had plunged into the Indian Ocean near the Maldives, after most of it had burned up in the atmosphere.

For many who have followed the rocket’s return, the news came as a big relief. In China, it was not only seen as a vindication of the rocket’s design, but also used by state media to argue that the intense global attention was merely a Western effort to discredit China’s space program and thwart its progress.

“Their hype and smears were in vain,” the Global Times, a state-run newspaper, said in an editorial Sunday, accusing US scientists and NASA of “acting against their conscience” and being “anti-intellectual.”

“These people are jealous of China’s rapid progress in space technology,” the paper said. “Some of (them) even try to use the noises they made to obstruct and interfere with China’s future intensive launches for the construction of its space station.”

While Beijing has long accused Western countries and media of holding China to a different standard, Chinese officials also routinely have a nationalist response to any criticism, branding it an ill-intended attempt to “smear China.”

Such fierce defensiveness is particularly evident when it comes to China’s space program, an important point of national pride for the Chinese public and a source of prestige for the ruling Communist Party.

China was a latecomer to space exploration, launching its first satellite only in 1970, 13 years after the Soviet Union and 12 years after the United States. But in recent decades, it has swiftly become a frontrunner in the space race — it was the first country to land on the far side of the moon in 2019, and successfully brought back lunar rocks last year.

The defensiveness to criticism from the West, especially the United States, is partially born out of what Beijing perceives as Washington’s hostility to block its progress beyond Earth’s atmosphere.

Since 1999, the US has imposed export controls on satellite technology to China. And in 2011, Congress passed a law that imposed restrictions on NASA engagement with China.

Consequently, Chinese astronauts are barred from the International Space Station (ISS) — the only space station in orbit and a collaboration between the US, Russia, Europe, Japan and Canada.

As a result, China is building its own space station, the Tiangong (meaning heavenly palace in Chinese). Last month, it successfully launched its first module with the Long March 5B — the rocket that drew the world’s scrutiny.

In blaming the West for their “smear campaign,” however, Chinese state media and space experts omitted to explain why the Long March 5B had caused anxiety among global scientists.

Rocket stages are often dropped before they reach orbit along trajectories that can be predicted before the launch. And when they are designed to reach orbit, they usually come with devices that allow more controlled reentries and aim for the ocean.

Or they are left in so-called “graveyard” orbits that keep them in space for decades or centuries. The Chinese rocket, estimated to weigh over 20 tons, is the largest space object to return uncontrolled to Earth in nearly three decades — and a major deviation from the practice of other space agencies.

There are also worrying precedents for what happens in such incidents: the US Skylab space station broke up over the Indian Ocean and scattered debris across Western Australia when it returned to Earth in 1979.

More recently, a piece of debris from the SpaceX Falcon 9 rocket landed on a farm in Washington state, after the second stage of the rocket broke up on reentry.

But amid deepening political mistrust of the US, and a lack of technological exchanges, meaningful scientific international exchanges with Beijing are being sidestepped in favor of fanning the flames of nationalist anger.