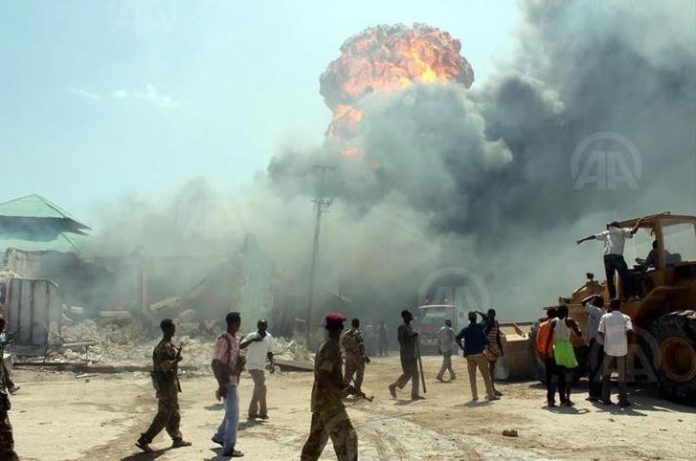 The 2017 bombing of Rann IDP camp in Borno State killed more than 160 civilians, many of them children. U.S played a secret role in attack on Nigerians in Borno

An investigation by the Intercept, an online newspaper, has accused the United States of playing an “unacknowledged role” in the 2017 bombing of Rann Internally Displaced Persons (IDP) camp in Borno State.

At least 160 civilians, many of them children, were killed in the attack.

The report published on 28 July said the attack was “referred to as an instance” of U.S.-Nigerian operations.

“Evidence suggests that the U.S. launched a near-unprecedented internal investigation of the attack because it secretly provided intelligence or other support to the Nigerian armed forces,” the American non-profit news organisation reports, citing a secret U.S, military document it obtained.

Read More: Pelosi is troublemaker, US beware of Chinese military might – Victor Gao

“The U.S. inquiry, the existence of which has not been previously reported, was ordered by the top American general overseeing troops in Africa and was specifically designed to avoid questions of wrongdoing or recommendations for disciplinary action.”

PREMIUM TIMES reported how the air raid by the military occurred in January 2017 to target Boko Haram members.

The Nigerian military and the federal government had said the “jet was meant to target suspected Boko Haram members when it accidentally bombed the camp.”

The Nigerian Air Force expressed regrets for carrying out the airstrike, which also “killed nine aid workers and seriously wounded more than 120 people.”

John Eneche, the then defence spokesperson, had said the attack was carried in that location because it was not reflected in the operational map as a humanitarian base.

“Hence, it appeared as a place that could equally be used for enemy activities.”

“Thus, when the mass movement was noticed through aerial satellite observation, it was taken for Boko Haram terrorists’ activity, which needed to be neutralised with speed,” Mr Eneche said.

U.S. role in this attack

According to the report, U.S. surveillance and intelligence-gathering operations have often been employed in Nigeria, including a Predator drone flown from neighboring Chad, in addition to a longer-range Global Hawk and a manned, turbo prop plane, deployed over Nigeria beginning in 2014, ostensibly to search for children kidnapped by Boko Haram, the Intercept said.

The paper reported that “just days after the attack, U.S. Africa Command secretly commissioned Brig. Gen. Frank J. Stokes to undertake an investigation to determine the facts and circumstances of a kinetic air strike (‘strike’) conducted by Nigerian military forces in the vicinity of Rann, Nigeria.”

“Its findings were never made public,” the paper reported, noting “AFRICOM did not answer its questions about the results of Stokes’s investigation or the extent of U.S. involvement in the attack.”

Relying on documents obtained under the Freedom of Information Act, the Intercept said “it is impossible to ascertain the full extent of U.S. involvement in the 2017 airstrike, but Stokes’s official instructions suggest that the U.S. provided intelligence or other support to the Nigerian military.

“You will gather and preserve any background information that is relevant to a complete understanding of U.S.-Nigerian operations such as this strike,” reads the document cited by the intercept.

“Stokes’s mandate included an inquiry into how the U.S. shares information with Nigeria’s military, protocols concerning its use, and “after action reporting procedures when shared information is used in a strike (e.g., battle damage assessment reports).

“The formal investigation of an African partner’s airstrike was rare, if not unprecedented, and indicates this was no ordinary Nigerian bombing gone wrong. A former Pentagon official with expertise in investigations of civilian casualty incidents, who spoke to The Intercept on the condition of anonymity, said that he had never encountered a U.S. investigation of an ally’s airstrike.”

Meanwhile, the United States has said it was not involved in the 2017 airstrike on the IDP in Rann, a remote village in Borno State.

Jeanne Clark, the spokesperson for the U.S. Mission Nigeria, told PREMIUM TIMES that America, through its embassy in Nigeria, actively engaged the Nigerian military to ensure safeguards were implemented that could help prevent similar incidents.

Regarding the airstrike on the IDP camp, she said it was “the Nigerian Air Force” that “consequently made changes in order to minimise the threat of civilian harm.”

“These changes include a U.S.-supported Air to Ground Integration programme and human rights and law of armed conflict training that have enhanced the Nigerian Air Force’s procedural controls,” she said in an email response to PREMIUM TIMES.

Ms Clark noted that the U.S. Embassy Nigeria “routinely engages with the Armed Forces of Nigeria to reinforce civilian protection and human rights practices through our security force professionalisation efforts that seek to create a modern and effective force.”

A deputy spokesperson at the State Department’s Bureau of African Affairs, Ryan Essman, had issued a similar statement to The Intercept.