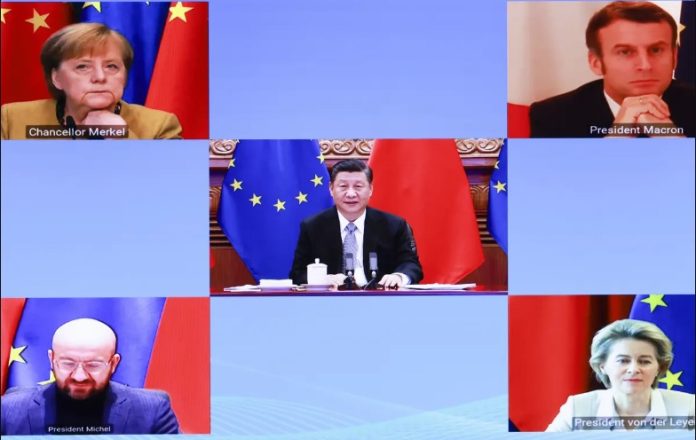 At a reception in Beijing last month, the European Union’s outgoing ambassador was warned by a senior Chinese official that the words and deeds of European lawmakers towards China – including visits to Taiwan – would be viewed as official EU policy.

“China will never deal with two EUs,” Wu Hongbo, a veteran diplomat and special envoy for China on European affairs, said at a leaving party for Nicolas Chapuis on July 8, according to sources familiar with the conversation.

“You are telling us that you have nothing to do with the European Parliament,” he said. “That’s not OK for China. China sees the EU as one, so whatever the separation of powers in the EU – we recognise only one.”

The remarks came amid a flurry of EU-Taiwan contacts, parliamentary resolutions, and visits from European delegations to Taipei.

They also took on new significance with the visit of US House of Representatives speaker Nancy Pelosi to Taipei this week.

Pelosi, second in line to the US presidency, was on the island for just 19 hours, but sparked a furious reaction from the Chinese government that escalated through the week.

The House speaker visited the self-governing island under a shroud of secrecy and despite repeated warnings from Beijing.

While there is some precedent for the trip – one of Pelosi’s predecessors, Newt Gingrich, visited in 1997 – Beijing does not see those meetings as comparable.

Ties between Washington and Beijing were much better 25 years ago than they are today and Gingrich led the campaign to end sanctions on Beijing after the bloody Tiananmen crackdown in 1989.

In a furiously worded email on Friday, the Chinese Mission to the EU hit back at the G7’s suggestion that Pelosi’s trip was a “normal visit”.

“Nancy Pelosi isn’t a nobody, but the incumbent leader of the US Congress and ranked second in the US presidential line of succession,” it said, adding that “even a three-year-old child would understand” that Gingrich’s visit does not justify Pelosi’s.

Soon after Pelosi’s plane touched down, the People’s Liberation Army announced a series of live-fire military drills surrounding the island.

Missiles were launched from the mainland into waters off Taiwan, and diplomatic dressings down were handed to Western ambassadors whose foreign ministers had joined a G7 statement criticising Beijing’s reaction.

According to CNN, United States officials said: “China may be confusing Pelosi’s visit with an official administration visit, since she and Biden are both Democrats. Administration officials are concerned that China doesn’t separate Pelosi from Biden much, if at all.”
It is a dynamic EU representatives in Beijing are familiar with.

The European Parliament is one of four lawmaking institutions in the EU’s Byzantine structures, but the actions of its members do not represent changes in the bloc’s policies.

Resolutions are seen as ways to steer policy in certain directions, and while official delegations need to be okayed by the parliament’s leadership, they are not vetted by the other chambers of power, such as the technocratic European Commission or the European Council, which represents member state governments in Brussels.

Nonetheless, whenever the parliament criticises China – which has been frequently in recent years – the EU’s ambassador in Beijing is summoned or given formal diplomatic notice of China’s displeasure, sources said.

These occasions also include a series of visits to Taiwan by EU lawmakers, which started with the parliament’s committee on foreign interference and disinformation last year, and the latest of which was by European Parliament Vice-President Nicola Beer last week.

EU lawmakers vowed to continue the visits, despite Beijing’s reaction to Pelosi’s trip. The European Parliament’s trade committee, for example, plans to visit the island later this year.

“Parliamentary contacts with Taiwan have long been part of the political status quo,” said Reinhard Buetikofer, the head of the European Parliament’s delegation on China. “The EU and Germany cannot accept that China is shifting the red lines here. We define our one-China policy ourselves; we will not let Beijing dictate it to us.

“There will be more parliamentary visits in the future. International solidarity between democracies includes Taiwan.”
Beijing has yet to take as tough a line with Brussels as it has on Pelosi’s trip. But an unofficial embargo on Lithuanian goods over the hosting of a controversially named Taiwanese diplomatic office in Vilnius showed that punishing Europe is not out of the question.

For now though, the EU’s exchanges with Taiwan are perceived as an “irritant” rather than the full-blown crisis Beijing perceives in Washington’s advances, said Lanxin Xiang, Geneva-based research associate specialising in Chinese governance at the Kennedy School of Harvard University.

However, the flurry of recent EU-Taiwan activity will be read in Beijing as the EU coming closer to the US position, which China sees as advocating Taiwanese independence, Xiang said.

“That is exactly what the Chinese worry about,” he said. “You have a Pelosi, you could have [US Secretary of State] Antony Blinken, who knows? This is what the Chinese call a ‘salami slicing’ strategy towards Taiwan independence. It elevates it step by step, and it will normalise it.”

China’s refusal to separate parliamentary actions from official EU policy has led to what EU officials speaking privately described as a “very unhealthy” situation, in which the parliament, which is often dismissed by critics as a talking shop, is playing an outsize role in the overall relationship.

Analysts studying the relationship said Beijing’s conflating of the division of powers in democratic systems is “counterproductive” in preventing lawmakers from visiting Taiwan.

“Beijing’s reactions to parliamentarians’ visits may not necessarily stem from its misunderstanding of the division of power in democracies,” said Grzegorz Stec, an analyst of EU-China relations at the Brussels office of German think tank MERICS.

“It may instead deliberately escalate tensions and use inflammatory rhetoric to put pressure on governments and accrue leverage as foreign governments attempt to de-escalate. The goals being to prevent future undesired behaviours.”

The EU has refrained from making independent statements on the Taiwan crisis – instead joining a G7 circular that accused China of “destabilising the region”.

The bloc’s top diplomat, Josep Borrell, discussed the situation with Blinken at an Asean meeting in Cambodia on Thursday, but did not hold a meeting with Foreign Minister Wang Yi, who also attended the event.

While EU officials were monitoring the supply chain fallout from China’s retaliation to Pelosi’s visit – including the impact on the microchip sector of a ban on Chinese sand shipments to Taiwan – there was reluctance to wade too heavily into a dispute that is seen as affecting Brussels only indirectly for now.

Chinese representatives in Europe, however, have come out swinging.

Beijing’s mission to the EU described the G7 statement as “evil and shameless”, while the ambassador to France, Lu Shaye, told a French TV anchor, with reference to Taiwan, that “after reunification, we are going to do re-education”.