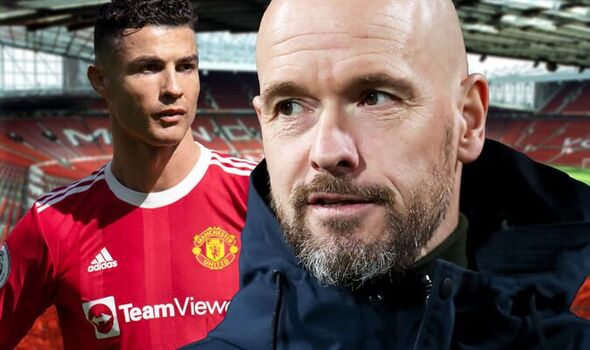 Manchester United’s new boss Erik Ten Hag does not see Cristiano Ronaldo as a problem and can’t wait to work with him next season.

Erik Ten Hag has described Cristiano Ronaldo as a football ‘giant’ and wants to kee him at Manchester United next season.

Ten Hag is expected to resume his role as the new permanent manager of the Red Devils on Monday after ending his contract at Dutch champions Ajax, six weeks earlier, as per several reports.

According to a report from the Telegraaf, Ten Hag will be in Manchester later today to resume work at Old Trafford and has put to bed rumors around the future of superstar, Ronaldo.

“I look forward to working with Ronaldo,” He said in an interview with Telegraaf.

“Ronaldo is a giant because of everything he has shown so far and because of how ambitious he is.”
Ronaldo has scored 24 goals in all competitions this season, 18 of those goals have been in the English Premier League, where the Red Devils have underwhelmed this season under their former boss, Ole Gunnar Solksjaer, and Ralf Rangnick, who has been the interim manager since November.

However, despite his performance and record for United, there have been suggestions that the 37-year-old is one of the biggest problems at the club and won’t be a right fit for the new boss, Ten Hag.
But the former Ajax coach has come out to rubbish those suggestions after saying he wants to keep the club legend, who has been important for the club.

“I want to keep him at Manchester United, of course,” Ten Hag added. “He has been very important for this club and can produce great statistics.”

Ten Hag to resume work at Manchester United on Monday

Ten Hag will be at Manchester United from Monday as he begins another new era at Old Trafford in a related development.

Ten Hag’s contract at Ajax was expected to expire next month but the Dutchman terminated it early to resume at Old Trafford where he believes there is a lot of work to be done.

“From the 16th of May, I am the manager of Manchester United. A lot has to happen in preparation for the new season, such as the implementation of the staff members and the squad for the next season. I will make my mark on both and I want it to be done extremely carefully.”

“I had choices to work at a different club than United, with a better foundation. But I chose Manchester United. Things have to get addressed there and that’s a challenge. The club and I are on the same wavelength about how I want to do this.”