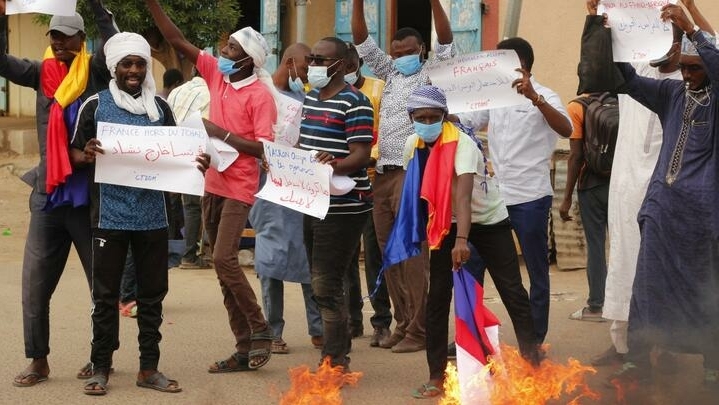 Chadian police have fired tear gas and used water cannons to disperse hundreds of protesters who held anti-French demonstrations in the capital and other towns.

The event organized by the Chadian civil society coalition Wakit Tamma aimed to denounce France’s backing of the Transitional Military Council that seized power following the battlefield death of President Idriss Deby in April 2021, according to a spokesman.

“France installing dictators on our heads. We only ask that our people be respected,” Max Loalngar, a Wakit Tamma coordinator, told AFP.

Deby’s son Mahamat Idriss, who is leading the military transition after his father, also promised free elections this year.
The government later issued a statement saying, “Chad’s problems should remain strictly national ones and should be debated among Chadians.”

It invited “all Chadians to join the inclusive dialogue process” paving the way for “free and democratic elections” following an 18-month transition period.

“We are demonstrating against France for its support for the transitional military council,” said Mahmoud Moussa, a high school teacher in the Chadian capital who joined the protest.

France has been one of the world’s colonizing countries that after many years of slavery still controls countries spread over more than 12 territories and treats their people as second-class citizens.

It has had more than 50 military interventions in Africa since 1960 when many of its former colonies gained nominal independence.

Analysts say it is premature to call it the end of France’s military intervention in Africa, believing Paris is only readjusting its post-colonial plans.