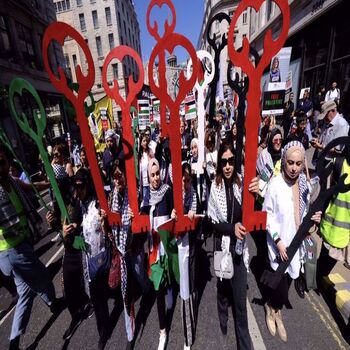 Yet again Nakba London’s streets have been brought to a standstill by pro-Palestinian activists calling for an end to Israeli crimes against humanity in the occupied territories. Such events are building momentum and the calls for the last apartheid on earth to be dismantled are growing louder.

Atrocities are committed in the occupied Palestinian territories on a daily basis; from ethnic cleansing to murder. For decades, Western media have tried to downplay the severity of the satiation there, but today, with social media and so many cameras recording the madness, it has become almost impossible to bury the truth.

Only days earlier, a prominent Palestinian journalist died when she was shot in the face by Israeli forces. She was reporting on an Israeli army raid on the West Bank. Her death caused outrage and scenes of her coffin bearers being beaten by Israelis made headlines. Some 229 rights groups have called for Israel to be held accountable for what they call a premeditated assassination.

Such protests are a key feature of London life, but the conservative government is trying to outlaw actions like this. A raft of new measures limiting public protests was recently added to the already-controversial Policing Bill. It might also become illegal to boycott, divest and sanction entities like Israel, thus robbing public bodies of their right to make ethical decisions. It’s the Information Age, and it remains to be seen how the UK hopes to maintain its democratic persona, now that its grip on the media has loosened.