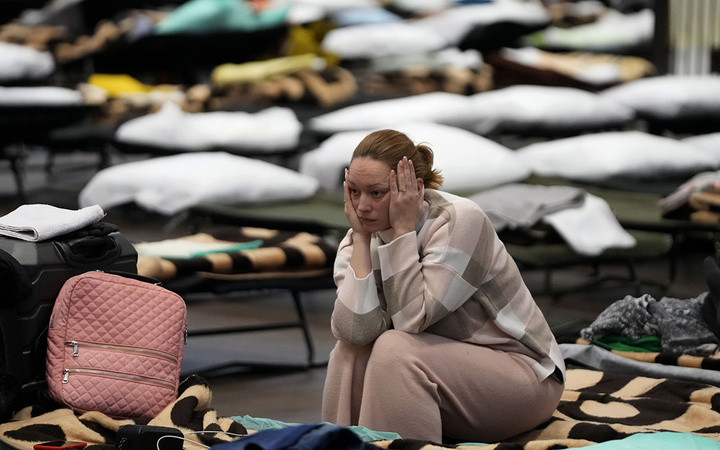 Since the start of the war, over 4.6 million Ukrainian refugees – 90% of whom are women and children – have fled their homes to seek sanctuary in neighbouring countries. Poland has received the highest number of displaced Ukrainians, as nearly 3 million refugees have entered the country since February. Amongst them are rape survivors and pregnant refugees in urgent need of medical help, including access to emergency contraception and abortion.

However, Poland’s near-total ban on abortion added to a lack of key sexual and reproductive health medicines and products obstruct humanitarian efforts to provide medical assistance to rape survivors and refugees who wish to terminate an unwanted pregnancy.

More than 60 organisations, including Amnesty International and local NGOs, have recently urged European governments to address the issue of women and girls’ sexual health and reproductive rights as a humanitarian priority, and a vital step in tackling the consequences of gender-based violence in times of conflict.

In the meantime, however, doctors and volunteers based in Poland struggle to reach out to rape survivors and are compelled to put themselves at risk of imprisonment to provide distressed refugees with safe abortifacients and contraceptive pills.

Damming evidence of war crimes, including rape, has emerged in towns recovered by the Ukrainian army following the retreat of Russian forces, and further raises concerns over whether Russia is strategically using sexual violence to terrorize and traumatize the Ukrainian population.

Lyudmila Denisova, the Ukrainian Parliament’s Commissioner for Human Rights, has recently reported that in Bucha, 25 girls and women aged 14 to 24 were held captive in a basement by Russian soldiers and repeatedly assaulted and many were impregnated.

“Nine of them are pregnant,” she said. “Russian soldiers told them they would rape them to the point where they wouldn’t want sexual contact with any man, to prevent them from having Ukrainian children.”

Aid organisations and charity workers have also raised the alarm regarding increased risks of human trafficking as women and children are targeted at the border by suspected pimps and sex traffickers. This of course, is unrelated to the Russian war strategy and is an unfortunate side-effect of the conflict, as common criminals see an opportunity for gain.

Krystyna Kacpura, the executive director for the Polish-based Federation for Women and Family Planning, stated: “Women and girls who are coming to Poland from Ukraine need to be able to urgently access essential sexual and reproductive healthcare. At the moment, the barriers they are facing in Poland are severe and they are dealing with very distressing situations.”

Poland’s restrictive laws on abortion and contraception hinder humanitarian help to Ukrainian refugees
Last year, Poland’s new ruling on abortion effectively banned all pregnancy terminations, except in cases of rape, incest, or if the mother’s life is at risk.

Technically, then, it is legal for a Ukrainian rape survivor to gain access to the procedure in Poland. However, for such access to be granted, the Polish government requires that a criminal investigation proves the rape in fact occurred.

Not only is it an extremely time-consuming process, making it impossible for rape survivors to terminate the pregnancy in its early stages when it is safer and much less traumatic, but in the case of Ukrainian refugees, this investigation simply cannot even be opened.

International Financial Institutions To Provide Over $8 Billion In Assistance | Investing in Women’s Reproductive Health is an Investment for All | First They Came for Mariupol: The Hero City of Ukraine Is Falling

Mara Clarke, founder of Abortion Support Network, explains: “The situation for people pregnant by rape shows that ‘exception clauses’ to abortion laws do not work; while abortion for rape is technically allowed in Poland, it is almost never performed.”

It’s not just abortion that’s made nearly impossible to access by Poland’s restrictive laws. In February 2022, a new ranking by the European Parliamentary Forum for Sexual and Reproductive Rights pointed at Poland’s “exceptionally poor” contraception policies – the worst in Europe. More specifically, emergency contraception, also known as the morning-after pill, is only available by medical prescription, which makes it very difficult for Ukrainian refugees to obtain.

In consequence, doctors, volunteers, and NGOs are compelled to develop illegal distribution networks for abortifacients and contraceptive pills. Maria Clarke says: “We already have established pathways for people to access abortions so either we help people access abortions with pills, which is what the World Health Organisation (WHO) says is the most safe abortion up to 12 weeks, and we’ve put the information on how to take the pills in Russian and Ukrainian.”

It is however difficult to know whether the pills will safely reach the women who need them since their refugee status often means they do not have a fixed or personal address: “[We]’ve already heard from one person who was staying in a facility [refugee centre],” Ms Clarke says, “and the post was searched, so you can’t get that person pills through the post, you have to physically hand them the pills.”

In other instances where pills were not available, Poland-based volunteers reportedly helped refugees transfer to neighbouring countries where abortion is legal.

The biggest obstacle: Poland-based volunteers and doctors helping Ukrainian refugees access abortion face criminal sanctions
In Poland, anyone who decides to help a woman get an abortion outside of the current legal framework takes a significant risk as they could be subjected to criminal sanctions including imprisonment.

Poland is already setting an example as Polish pro-choice activist Justyna Wydrzyńska, co-founder of abortion rights advocacy group Abortion Dream Team, becomes the first in the country to face trial after having sent miscarriage-inducing pills to a domestic abuse survivor in February 2020. She now faces up to three years in prison.

Volunteers and doctors further fear that Poland’s strict ban on abortion will prevent more pregnant refugees from coming forward, especially rape survivors who already struggle with debilitating feelings of shame as a result of their trauma.

“This is a hidden crime,” says Oleksandra Matviichuk, head of the Centre for Civil Liberties, a Ukrainian human rights NGO, “and we have no idea how much women and girls need such kind of assistance.”

Mara Clarke insists that the number of Ukrainian refugees who have reached her and her network is alarming: “We have in fact collectively heard from more than 200 people from Ukraine seeking help to get abortions. We also expect these numbers to skyrocket.”

Humanitarian organisations, doctors, and local volunteers can only do so much to help Ukrainian refugees access abortion and contraception amid such a risky legal context.

As Leah Hoctor, of Europe for the Centre for Reproductive Rights, said: “Robust political will and financial support for sexual and reproductive health services is vital to address serious risks of harm to the health of women and girls and to ensure protection from gender-based violence.”

As the war and ensuring refugee crisis continue to render more Ukrainian women and children vulnerable to situations of sexual abuse and human trafficking, international and local NGOs that specialise in sexual and reproductive healthcare urgently need European back-up in order to efficiently limit the damage caused by mass sexual violence, without placing their members and the refugees themselves at risk of prosecution and further trauma.