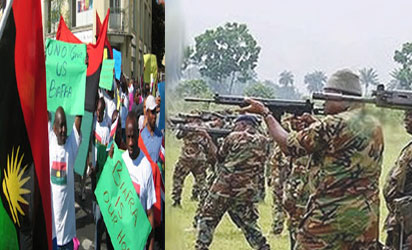 The Nigerian Army has enlisted the help of South-East ex-soldiers to quell IPOB and ESN’s insurrection against President Muhammadu Buhari’s regime.

The Nigerian Army has enlisted the help of South-East ex-soldiers to quell IPOB and ESN’s insurrection against President Muhammadu Buhari’s regime.

Specifically, the Chief of Defence Staff, Lucky Irabor, urged retired senior military officers in the eastern region to offer their wealth of experience in the fight against unknown gunmen and the proscribed secessionist group, IPOB.

Mr Irabor made the request on Thursday while speaking at a security meeting in Owerri.

“Given the current dynamics of insecurity, it behooves retired senior officers to offer valuable advice to aid our security personnel in the fight against criminality.

”We sincerely hope that having obliged your presence at this interactive meeting, you will bring your wealth of experience to bear so that together, we will surmount our challenges,” said the defence chief.

He thanked the officers for attending the meeting and appealed to them to proffer solutions to security challenges in the region and nation.

Mr Irabor also called on Nigerians to desist from using violence to pursue their political or other objectives, warning that the nation’s security agencies will not tolerate any form of violent conduct in any guise.

Earlier in an address of welcome, Maj.-Gen. Taoreed Lagbaja, the General Officer Commanding, 82 Division of the Nigerian Army, described the retired officers as key stakeholders in the nation’s security.

Mr Lagbaja commended the defence chief for the initiative and reiterated the division’s commitment to restoring peace and security in the South-East.

He added that the military held similar interactions in the South-West and North-West.

Mr Ihejirika called on Nigerians to support peace and security efforts by the military.

He expressed the confidence that the crime rate would reduce in the country with all hands on deck.

He advised Nigerians to cooperate with security agencies, saying that the war against crime could only be won with civilians’ support.

Also in attendance were the police commissioner in Imo, Abutu Yaro, and scores of other senior military officers.