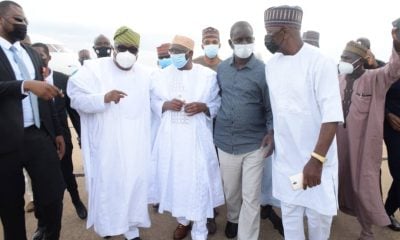 Ilorin, the Kwara State capital went agog on Sunday with the first homecoming of the Chief of Staff to President Mohammadu Buhari, Professor Agboola Ibrahim Gambari.

Professor Gambari was in Ilorin, his country home for the Muslim Eidel-Kabir celebration.

He arrived at the Ilorin International Airport to the warm embrace of thousands of citizens and top government officials led by the state deputy governor, Kayode Alabi.

Professor Gambari who touched the Ilorin International Airport at exactly 5.27 p.m on Sunday, amid jubilation was received by the deputy governor who stood in for Governor Abdulrahman Abdulrazaq, Speaker of the State House of Assembly, Secretary to the State Government, serving senators, and former Nigerian Ambassador to Malaysia, Alhaji Nura Mohammed, among others.

Professor Gambari’s convoy drove straight to the Emir of Ilorin’s palace, where he held a private meeting with Dr Ibrahim Sulu Gambari.

Gambari’s convoy had navigated through the heavy traffic of supporters displaying various placards welcoming him home.

According to another report, Ilorin, the capital city of Kwara State, was agog on Sunday with the homecoming of the Chief of Staff to the President Professor Ibrahim Gambari ahead of this year’s Eid-al-Adha celebration.

In what is his first homecoming since the high-profile appointment, Gambari touched down at the Ilorin International Airport at exactly 5:27 pm amidst cheers and jubilation from thousands of residents who thronged the area to catch a glimpse of him.

The convoy headed straight to the palace of Emir of Ilorin Dr. Ibrahim Sulu-Gambari (CFR) with whom the august visitor had a private audience.

Gambari’s convoy had meandered through a heavy traffic of supporters brandishing varying placards who hailed his excellent working relationship with Governor AbdulRahman AbdulRazaq as the latter increasingly brings governance closer to the grassroots with various developmental projects and people-focused programmes.

“Our administration thanks the chief of staff for his reassuring support for Project Kwara under Governor AbdulRahman AbdulRazaq,” one of the placards read. “Your working with the Otoge government is bringing a lot of goodies such as NEPZA Free Trade Zone; Family Homes Funds; Solar Home Systems from REA and NDPHC; CBN Loans for the Solar Home Systems Programmes; Lata (Patigi) Ranching Project.”

Another banner linked the establishment of the 100-bed capacity mother and child hospital in Eiyenkorin, Asa local government to this “harmonious relationship” between Gambari and the state government.