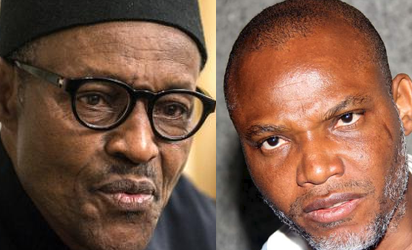 Nnamdi Kanu, the leader of the Indigenous People of Biafra, IPOB, has disclosed that his abductors linked him to Islamic terrorists, Al-Shabab.

Kanu disclosed that those who abducted him said the Nigerian government told them that he was a member of Al-Shabab.

Kanu’s lawyer, Aloy Ejimakor, disclosed this detail after the Department of State Services, DSS, allowed him access to the IPOB leader.

Ejimakor disclosed that Kanu was tortured and subjected to inhumane treatment upon his capture.

The IPOB leader is widely believed to have been rearrested in Kenya and repatriated to Nigeria to continue his trial for treason before an Abuja Federal High Court.

However, Ejimakor said: “The people that abducted him said that they were told by their sponsors that Kanu was a Nigerian terrorist linked to the Islamic terrorists in Kenya, presumably Al-Shabab.

“But after several days when they discovered his true identity, they tended to treat him less badly. Despite that, they told him they felt committed to hand him over to those that hired them.

“Kanu was in point of fact tortured and subjected to untold cruel and inhuman treatment in Kenya. He said his abductors disclosed to him that they abducted him at the behest of Nigerian government.

“The IPOB leader was blindfolded and driven to the tarmac very close to the plane without passing through the airport immigration. The plane departed Nairobi at about 12 p.m. and arrived in Abuja in the evening.

“He was flown to Abuja in the private jet on Sunday 27th June, 2021 from Jomo Kenyatta International Airport, Nairobi and that he was the lone passenger,” he added.

Ejimakor stated that the circumstances surrounding Kanu’s rearrest would make it difficult for any court of law to proceed with his trial.