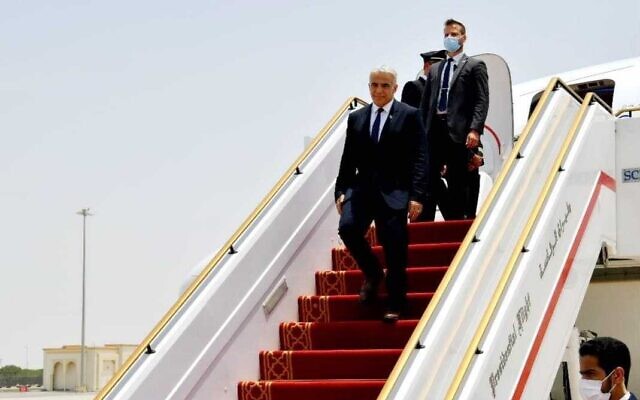 Taking their alliance to the next level, Israel’s newly-appointed foreign minister Yair Lapid is in the United Arab Emirates (UAE) to open the regime’s embassy in the Arab kingdom, only weeks after Tel Aviv’s bloodshed in the Gaza Strip.

Becoming the first Israeli minister on an official visit to the UAE, Lapid formally inaugurated the regime’s embassy in Abu Dhabi on Tuesday and is expected to open the consulate in Dubai, almost five months after the missions became functional.

The UAE formally opened its embassy in the Israeli-occupied territories, located in the Tel Aviv stock exchange, earlier this month.

Israeli ministers have previously visited the Arab country, but Lapid is the most senior official to make the trip, and the first to travel on an official mission.

The two sides, which maintained discreet cooperation for years made their ties public in August 2020, as part of an agreement brokered by former US President Donald Trump.

The visit has assumed an added significance since it comes weeks after a new political dispensation came into force in Tel Aviv, ending the 12-year reign of Benjamin Netanyahu, who had hailed US-brokered normalization deals with UAE and Bahrain as a personal achievement.

Pertinently, Palestinian factions had unanimously slammed the deal as a “stab in the back,” with Gaza-based resistance movement Hamas calling it “a reward for the Israeli occupation and crimes,” and the occupied West Bank-headquartered Palestinian Authority (PA) denouncing it a “betrayal” of the Palestinian cause.

In May this year, the UAE-Israel relationship faced its first litmus test when the Israeli regime launched a new bombing campaign on the besieged Gaza Strip, killing more than 300 Palestinians.

Despite their long-running claims of advocating the Palestinian cause against Israeli occupation, the Emiratis did nothing to stop the carnage of fellow Palestinians in Gaza, let alone reviewing the normalization deal with Tel Aviv.
Just days after the Israeli regime admitted defeat to the Palestinian resistance movement, followed by an Egypt-facilitated ceasefire, Israel and the UAE signed a tax treaty to facilitate investments in their respective economies and to eliminate double taxation.

Before that, Israel Aerospace Industries had inked a memorandum of understanding (MoU) with UAE’s state-owned Edge military firm to co-produce anti-drone systems, another indication that the Emiratis are siding with the occupying regime and betraying the oppressed Palestinians.

According to regional observers, at the heart of the UAE’s desire to normalize ties with the regime in Tel Aviv was its penchant for US-made F-35 fighter jets, which the peace deals with Israel, known as Abraham Accords, made possible.

Shortly after the deal was reached, the Trump administration authorized the sale of 50 advanced F-35 fighter jets to the UAE.

Lapid, during his visit to Abu Dhabi, is likely to discuss new military deals. Many business deals could also be in the offing, according to reports.

His maiden visit to the Arab country also coincides with ongoing efforts by Iran and the world powers to revive the 2015 Joint Comprehensive Plan of Action (JCPOA), which the US abandoned in 2018.

Before embarking on his visit to Abu Dhabi, the Israeli foreign minister on Sunday met with US Secretary of State Antony Blinken in Rome and reportedly opposed the efforts to revive the 2015 nuclear deal.

Pertinently, Iran was one of the few countries to strongly condemn normalization deals between the Israeli regime and the Arab states, calling it a “strategic folly.”