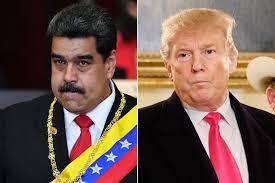 Venezuelan President Nicolas Maduro has once again accused US spy agency CIA and the American military of plotting to assassinate him, questioning whether current President Joe Biden is aware of the move.

“Did Joe Biden ratify Donald Trump’s orders to lead Venezuela into civil war and kill us? Yes or no? I ask,” Maduro said during a Friday address at a military ceremony.

The Venezuelan president suggested the chief of US military’s Southern Command Craig Faller and CIA Director William Burns, who recently visited Colombia and Brazil, had come to finish “preparations” for a “violent plan” to assassinate him.

In 2019, Maduro said the administration of former President Donald Trump planned to assassinate him and topple his administration.

“Donald Trump has without a doubt given an order to kill me and has told the government of Colombia and the Colombian mafia to kill me,” Maduro said at the time.

In December 2020, Caracas reported another assassination plot against the Venezuelan president, saying there was an attempt against Maduro’s life on the day of the parliamentary elections, which his ruling socialist party won by a landslide.

At the time, Maduro told reporters that he had to change his voting venue to the main military base in the capital Caracas after being informed of a plot to assassinate him, accusing the US-backed president of neighboring Colombia, Ivan Duque, of playing “a role in the plans to organize my assassination.”

“We received information from very reliable Colombian intelligence sources, that they were preparing an attack to assassinate me on election day,” he said.

Last month, Maduro declared that his country had once and for all gotten rid of the US oppression, warning that any efforts to interfere in the country’s internal affairs would not be tolerated.

In an interview with Bloomberg Television, Maduro touched on US economic sanctions against his country, saying his government had introduced a “war economy” to reduce the impact of US bans against the Central American nation.
“Sooner rather than later, the bolivar will once again occupy a strong and preponderant role in the economic and commercial life of the country,” he said.

He also dismissed claims by American officials that Caracas had become isolated in the world following its breaking away from the US influence, saying that his country had only broken free of “irrational, extremist, and cruel” US oppression.

Venezuela descended into political turmoil after the US-sponsored opposition figure and former president of the National Assembly, Juan Guaidó, unilaterally declared himself “interim president” in January 2019.

With Washington’s greenlight and help from a small number of rogue soldiers, Guaidó later launched a botched coup attempt against the elected government.

The Trump administration recognized Guaidó as the legitimate leader of Venezuela and publicly pursued a “regime change” policy against Maduro.

The Biden administration has reaffirmed the US recognition of Guaido as Venezuela’s interim president and has ruled out negotiations with Maduro anytime soon.

Washington has also imposed several rounds of crippling sanctions against the oil-rich Latin American country aimed at ousting Maduro and replacing him with Guaido.

The sanctions, which include illegal confiscation of Venezuelan assets abroad and an economic blockade, have caused enormous suffering to millions of people in the country.