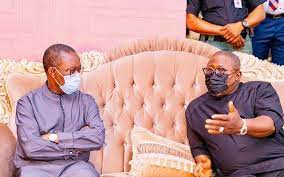 The lawmaker represented Isoko South Constituency I in the House of Assembly. Delta Governor Ifeanyi Okowa has expressed shock and sadness over the sudden death of a member of the state’s House of Assembly, Kenneth Ogba.

The lawmaker who represented Isoko South Constituency I, reportedly slumped and died on Sunday, June 27 in his home in Oleh.

He was elected into the House of Assembly in 2019.

In a statement by his Chief Press Secretary, Olisa Ifeajika, in Asaba, Okowa described the deceased as a committed, hardworking, patriotic, and selfless lawmaker who served the state and his constituents diligently.

“We mourn our fallen lawmaker who gave his best in service to God and humanity.
“He was a committed and hardworking member, who championed the cause of his people. Indeed, the late Kenneth Ogba died when his services to the state and nation were most needed.

“On behalf of the government and people of Delta, I commiserate with the Speaker of Delta State House of Assembly, Rt. Hon. Sheriff Oborevwori, members of the House, Isoko South Constituency I constituents, and the entire Isoko nation over the demise of Kenneth Ogba.

“As we mourn his passage, may Almighty God give his family, friends, constituents, and associates the fortitude to bear the loss,” he said, and prayed that God should grant his soul eternal repose.