Yoruba Nation agitator, Sunday Adeyemo, popularly known as Sunday Igboho, has insisted that nothing will stop the already planned Lagos protest scheduled for the 3 July.

The All Progressives Congress, APC, UK Chapter, had earlier urged Igboho, to shun the planned Lagos rally slated to take place on July 3.

In a statement on Tuesday, the Chairman of APC UK, Dr Phillip Idaewor, urged the Yoruba activist to pipe low and shun any planned protest.

Idaewor stated that there were other ways for the group to channel their agitations rather than engage in a rally that might be hijacked by hoodlums to unleash terror on Lagos residents.

However, Igboho, in a statement by his media aide, Onaolapo Omiyale Ademola, said nothing would change the stipulated date for the rally holding in Lagos. 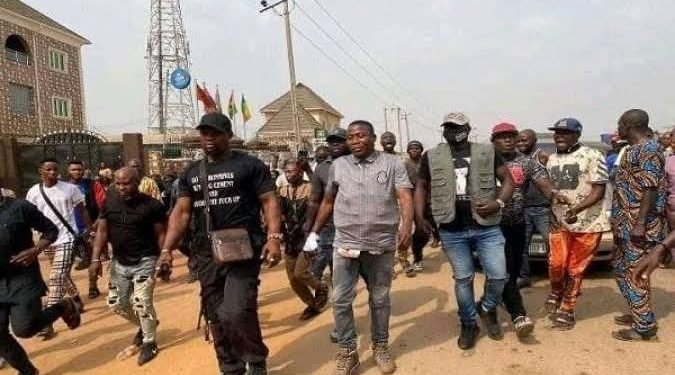 He added that the march will be a “mega” rally regardless of what the security threats will be.

In another video posted on Facebook by Sunday Igboho’s spokesperson, Olayomi Koiki, the rally will take off from 7UP at Ojota, Lagos.

Meanwhile, the Lagos State Police Command has said that it is not aware of the planned rally.

The state police spokesperson, Muyiwa Adejobi, during an interview with newsmen, said the command will react once it is notified of the rally.

“I am not aware of Sunday Igboho’s planned Lagos rally.

“When the command is aware, the command will react to that. For now, we are not aware of that,” he said.