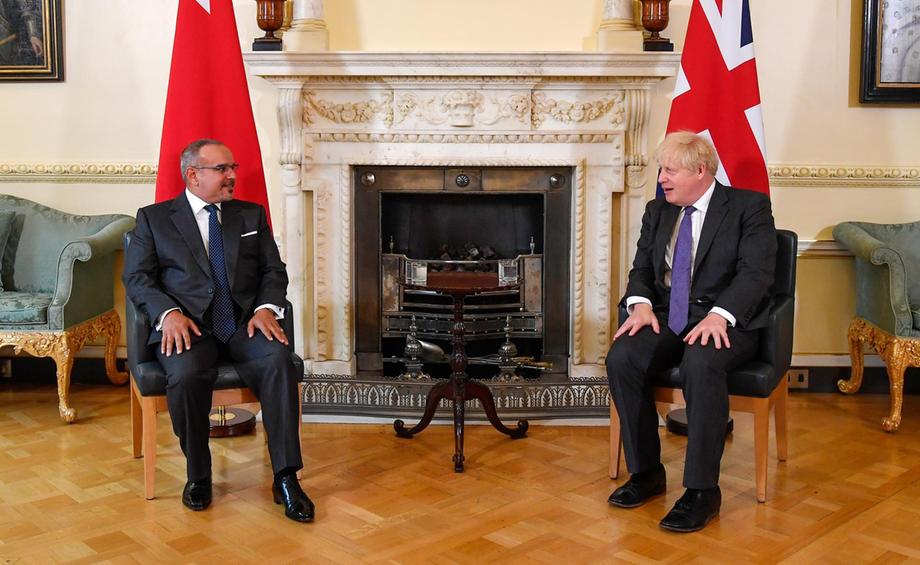 The British Prime Minister, Boris Johnson, met with Bahraini Crown Prince, Salman bin Hamad Al Khalifa, at number 10 Downing Street on Thursday The meeting was not announced in advance, either by the Foreign Office or Downing Street, over reported security concerns.

According to a statement published following the meeting, the two leaders discussed the global efforts to combat the COVID 19 pandemic, regional security issues, and defense collaborations with Boris Johnson commending Bahrain for normalizing its ties with Israel.

The statement infuriated human rights activists who say the British Prime Minister should have put Bahrain’s rights violations on the meeting’s agenda.

In a letter to Johnson with regard to foreign secretary Dominic Raab, the Bahraini Institute for rights and democracy slammed the meeting, and demanded that human rights be put at the centre of all conversations with the Manama regime.

British politicians also took aim at the Prime Minister over the announced meeting with liberal Democrat pier, Lord Scriven, coming out and criticizing Johnson for what he called “rolling out the red carpet and putting trade over torture”.
The UK pulled out of the European Union, and they need as many new trade partners in order to shore up their economy as possible.

So, making a trade deal between the United Kingdom and Bahrain, one of the six GCC countries, does allow them to have preferential trade with one of their former colonies, and even though they know the country of Bahrain, run by the Al Khalifa family dynasty, is corrupt and ruled with an iron hand that uses repression, torture, and killing of its opponents.

They know that the profits that will come out of that investment will yield a substantial return.

In a letter to Johnson, Brendan O’Hara MP also expressed concern over the deterioration of Bahrain’s democracy and rights record.

Demonstrations in Bahrain have been held regularly ever since a popular uprising began in mid-February 2011. The participants demand that the Al Khalifa regime relinquish power and allow a just system representing all of Bahrain needs to be established.

On the 5th of March 2017 Bahrain’s parliament approved the trial of civilians by military tribunals, in a measure decried by human rights campaigners as being tantamount to the imposition of undeclared martial law countrywide.
Earlier this year, the UN High Commissioner for Human Rights accused Bahrain of being in violation of international law over its treatment of prisoners, some of whom were documented to be as young as 13 years old.

The death of political prisoner Husain Barakat in a Bahraini jail earlier this month reignited protests against the Al Khalifa regime. Under such circumstances, therefore, reaching a trade deal with Manama would definitely have bad optics for London.
The United Kingdom with its long history of empire has perpetrated numerous human rights violations, not only the imprisonment of opponents, but also the torture, the killing, the repression that empire thrives on. And the, even though the UK is a diminished Empire these days, it still aspires to try to retain what it has, and to expand on the power and wealth that it can get.

Human rights activists are urging the UK Government to clarify whether it’s looking to promote democracy or just strike deals.

The UK also has a vested interest in Bahrain militarily. Aside from arm sales, it established a military base there in 2017, which, like the US Fifth Fleet, serves any military plans that it has in that region.

This gives the regime in Bahrain another stamp of approval to continue its human rights violations against the oppressed people of Bahrain.