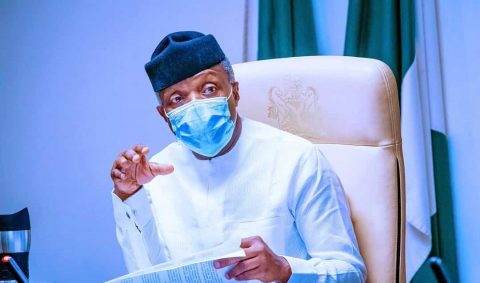 The Presidency says the N200 billion facility earmarked for the Federal Government’s  Social Housing Scheme was ready to commence disbursement for the project.
Laolu Akande, Senior Special Assistant to the President on Media and Publicity, Office of the Vice President, disclosed this in a statement on Sunday, in Abuja.
The presidential aide said that the National Social Housing Programme (NSHP), under the Economic Sustainability Plan (ESP), had received a further boost.
” Following the finalisation of the agreement with the Central Bank of Nigeria (CBN) on the N200 billion facility, the drawdown, with a guarantee from the Ministry of Finance, is now commencing to fund the housing project.
“The fund, which would be released in tranches, is expected to cover the NSHP project execution cost of the houses that would be constructed under the social housing project.
“Under the Social Housing Programme, the Federal Government plans to support 1.5 million Nigerians to acquire low-cost houses either through mortgage options or Rent to Own option.
“The scheme is expected to also generate 1.8 million jobs and deliver houses to about 1.5 million Nigerian families”, Akande said.
He also said that the number of beneficiaries of the ESP’s Payroll Support, Artisan support track, Transport Track and Free Business Names, had risen to million.
“Over one million Nigerians have so far benefitted from the Survival Fund scheme under the Buhari administration’s ESP, with about 500,000 Nigerians beneficiaries from the MSMEs Payroll support track, 44,500 beneficiaries under the one-off General MSME Grant, and another 265,425 under the artisan support track.
“Besides, there are also 202, 494 Nigerians who have registered their business names for free.
“It would be recalled that payment to new beneficiaries of the Payroll Support track and the one-time General MSME Grant had commenced at the end of April.
“So far, under the ESP there are now over one million beneficiaries nationwide from the various schemes.
“For the Payroll Support track, there are so far 459,307 successful beneficiaries. Under the scheme, beneficiaries received payments of the N30,000 or N50,000 grant per month for a period of three months”, he added.
Similarly, he said that for the General MSME Grants, about 44,500 successful beneficiaries had received the one-off grant payment of N50,000 each.
Akande further said that the total number of beneficiaries of the General MSME Grant would increase in the coming weeks as the Steering Committee had approved payments to 40,114 new successful beneficiaries.
“In the same vein, 202,494 businesses have so far benefitted under the ESP’s Survival Fund formalisation support track, which is aimed at registering 250,000 new businesses for free, with the Corporate Affairs Commission (CAC).
“The formalisation support scheme commenced on the Oct. 26, 2020, with the registration by aggregators – CAC registration agents – across the 36 states and the FCT.
“The MSME Survival Fund, a component of the ESP, is designed to support vulnerable Micro, Small and Medium Enterprises (MSMEs) in meeting their payroll obligations and safeguard jobs in the sector.”
He said that the scheme was estimated to save not less than 1.3 million jobs across the country, and specifically impact over 35,000 individuals per state.
Akande said that the ESP’s Solar Naija programme, designed to provide access to electricity for 5 million households, serving about 25 million Nigerians in rural areas and under-served urban communities nationwide, had also recorded some progress.
A-SOLAR, one of the local solar companies implementing some aspects of the ESP Solar Naija programme in the delivery of 100,000 units across the country, received some boost with the completion of the disbursement of funds from the CBN, he said.
“The A-SOLAR transaction, which involves a guaranty by the Niger Delta Power Holding Company (NDPHC), has been completed.
“The disbursement from Sterling Bank to A-SOLAR is expected to be in tranches. The first tranche has been disbursed and the Letter of Credit for the importation of the first set of 30,000 systems is being finalised.
“Upon completion, about 30,000 solar systems are expected to be deployed to Kano, Edo, Delta, Kwara, Katsina and Cross River states, as part of the 100,000 units under the A-SOLAR arrangement.
“In the same vein, the Development Finance department of the CBN is finalising the approval of N20 billion to finance the downstream component of the programme to fund mini-grid and solar home system companies.
“Once the approval comes through, three companies will get direct disbursements from the CBN to commence their deployment,” he explained.