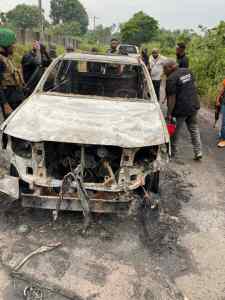 The police engaged the suspected killers in a gun duel. The Police in Imo State has shared the story of how they traced and shot dead hoodlums who took the life of Ahmed Gulak, a former Special Adviser to former President Goodluck Jonathan on Political Affairs.

Adamawa-born Gulak was killed in Owerri, the Imo State capital, as he made his way to the airport. He was a chieftain of the governing All Progressives Congress (APC).

According to the police, the driver of the car that was taking Gulak to the airport offered a description of the vehicles the hoodlums rode in–information that led to the confrontation between police and the hoodlums suspected to be members of the Indigenous People of Biafra (IPOB).

“Police teams from the special forces, PMF, IRT, Imo State Command Tactical Units who have all reached the scene of the killing were directed to immediately proceed on patrol and look for those vehicles,” the police says in a statement.

“Fortunately at Afor Enyi Ogwgu junction in same LGA, the police teams came in contact with the hoodlums with same vehicles mentioned by the driver.

“The hoodlums were said to have confiscated a trailer loaded with onions from the north at Enyiogugu, Mbaise, and were busy sharing the onions to the local population as they also took positions to protect themselves and attack any incoming security agents. Three people were killed in that incident.

“The hoodlums on sighting the police teams immediately opened fire on the teams and the gallant teams returned fire and eventually fatally wounded 10 of the hoodlums during the gun battle while others were pursued as they escaped with their vehicles.

“Three of the four vehicles– Toyota Sienna, Toyota Hilux and Toyota Camry used by the Indigenous People of Biafra (IPOB)/Eastern Security Network (ESN) terrorists for their operation were demobilized/recovered and 7 of the terrorists with bullet wounds were completely burnt down inside the Toyota Sienna and Hilux vehicles that caught fire during the gun battle.

“Serious efforts are in progress to trace and arrest several wounded IPOB/ESN terrorists who are hiding in the surrounding forests and villages.

President Muhammadu Buhari says he is outraged and disgusted at what he calls “the heinous murder of Adamawa politician Ahmed Gulak in Owerri, Imo State by yet to be identified gunmen.”

The president adds that: “I’m repulsed by such premeditated and gruesome murder of Gulak by evil people who are determined to undermine the peace, unity, and territorial integrity of our country.

“Let me warn however that nobody or group of people who engages in such despicable acts should expect to go free. We will deploy all resources at our disposal to ensure that such callous and criminal elements are brought to justice.”

There has been an escalation of violence in Nigeria’s southeast region in recent times, amid secessionist agitations.

Police stations and electoral offices have been burnt in Imo, Ebonyi, Enugu, and elsewhere across the southeast and south-south regions by suspected separatists.