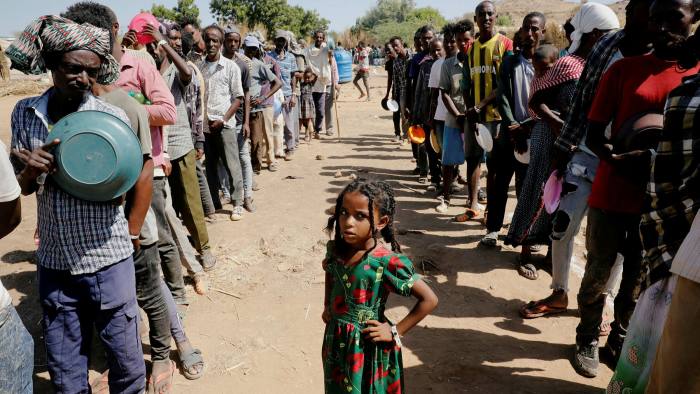 Citing aid workers and a doctor in Ethiopia’s northern region, Reuters reported Eritrean and Ethiopian soldiers forcibly detained more than 500 young men and women from four camps for displaced people in the town of Shire on Monday night.

The UN body said such sites should be a safe haven for displaced people.

The Ethiopian military, joined by Eritrean troops, has been accused by international human rights organizations of abuses and atrocities against the civilian population during a conflict that erupted in Tigray in November.

Ethiopian Prime Minister Abiy Ahmed sent troops into the region after accusing the once-dominant regional ruling party of launching attacks on federal army troops based in the region.

The conflict has killed thousands of people and forced hundreds of thousands to flee the region of about six million.

Eritrean troops have been involved in the conflict as well.

Some two million have been forced from their homes and 91% of the population of nearly six million are in need of aid, according to the latest report by the UN Office for the Coordination of Humanitarian Affairs.

Spokesman of the UN High Commissioner for Refugees (UNHCR), Babar Baloch, described the situation in the region on Friday as “traumatic and distressing.”

He said the UNHCR calls on “all parties to ensure the protection of civilians including the forcibly displaced.”

“It is crucial that all parties to the conflict recognize the civilian and humanitarian character of the displacement sites,” he said.

Baloch said some people had been released after UNHCR raised the matter with Ethiopian authorities, but did not provide any figure.

Baloch further said, “The situation is traumatic and distressing not only for the relatives of the missing but for all the displaced communities residing in the Shire.”

The United Nations World Health Organization (WHO) also warned earlier this week that Tigray was facing a horrifying situation with people dying of hunger and poor health.