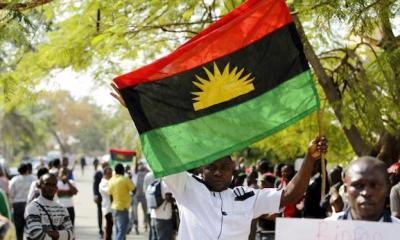 The leader of the group, Nnamdi Kanu, according to the report, allegedly paid the outfit the sum of $350,000 for their services.

While confirming the engagement of the firm, Kanu said the move was to see to the smooth sailing of the agitation for Biafra’s independence in the eyes of the wider world.

The Media and Publicity Secretary of IPOB, Emma Powerful, in a statement made available to Ripples Nigeria on Wednesday, said the funds were provided by Igbo businessmen in Nigeria and in the diaspora, who have bought into the Biafra project.

According to him, the group contracted the firm to help “secure the support of the US government and those of Britain, France, China, Russia, Israel, Germany, Australia and the European Union” in the agitation.

“It’s true that our Supreme and indefatigable leader, Mazi Nnamdi Kanu, has hired another lobbying group in the USA to facilitate the coming and recognition of Biafra independence.

“We engaged them with the wholesome amount of $350,000 to lobby for Biafra freedom in America and the whole world.”

Powerful added that the deal which is for an initial 12 months period with a possibility of a renewal, was signed in February with Kanu signing on behalf of IPOB.

Checks by Ripples Nigeria revealed that the BW Global Group is
co-owned by Jeffrey Birrel and Alan White, and is registered in Washington D.C.

The firm has a high concentration of top government officials, lawmakers, policymakers, and opinion leaders who are well versed in the art of international diplomacy.

Why IPOB is dismantling security facilities in S-East, S-South revealed

The agreement between IPOB and the BW Global Group took effect from March 1, 2021, months after an earlier one struck by Kanu with another US-based lobbying entity, Mercury Public Affairs LLC, expired.

Kanu, while signing the deal with Mercury, had said the funds were sourced from Igbo businessmen both at home and the diaspora who believed in the Biafran struggle.

“Our people both home and abroad contributed money for the project. Nobody can change our resolve towards the fight for Biafra freedom and independence.

“IPOB has been spending huge amounts of money for this project to ensure that Biafra is restored without another war but those traitors and saboteurs in Biafraland and elsewhere are bent on supporting terrorists to attack us from within and outside so that IPOB can engage them prematurely.

“The Federal Government wants us to declare an unprepared war for Biafra freedom, but we maintain our peace till we get what we want.”