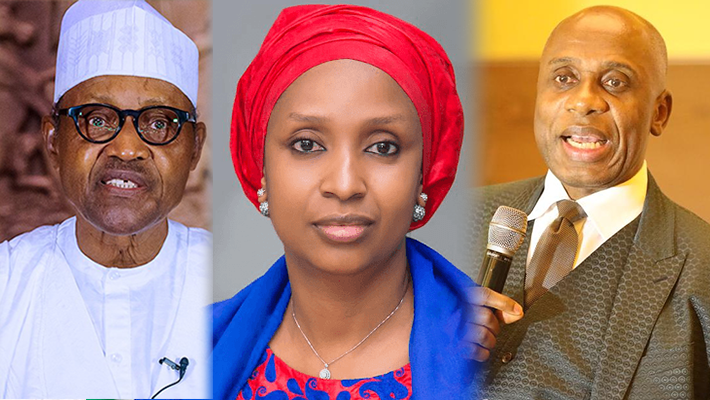 While many Nigerians are ready to swear by their ancestors’ coffins that the love between Usman and Mr. Rotimi Amaechi, the Transportation Minister, is like the one between the mongoose and cobra, the last straw was actually a letter.

In other words, Amaechi wrote that records submitted by the Budget Office of the Federation shows that the yearly remittance of operating surpluses by the NPA from year 2016-2020 “has been far short of the amount due for actual remittance.”

Then, Amaechi went ahead to cite an actual figure. He asked that NPA be investigated to ascertain the true financial position and the outstanding unremitted balance of N165billion.

It was earlier reported that Garba Shehu, presidential spokesman, said this was to allow for an administrative panel of inquiry to investigate the “management”.

All members of the panel were appointed by Rotimi Amaechi, the minister of transportation who supervises NPA.

Curiously, only Bala Usman, who had been having a cold battle with Amaechi, was asked to step aside, effectively suggesting that she, and not the management, is the target of the investigation.

To act as MD is Mohammed Koko, who was the Zenith Bank accounts officer to Rivers state government when Amaechi was governor.

Koko was appointed executive director of NPA in 2016 when Amaechi became minister. He is in charge of finance and admin, a logical target for the probe, given that the allegations to be investigated fall directly under his department.

Two members on the administrative panel named so far are from the ministry.

Incidentally, the chairman of the panel, who is the director of marine services, is on the NPA board.

This has raised several questions about the ultimate game plan.

Bala Usman was nominated as NPA MD in 2016 by Amaechi, with whom she had worked at the secretariat of the APC presidential campaign the previous year when Buhari won his first term in office.

She was serving as the chief of staff to the Kaduna state governor, Nasir el-Rufai, when she got the appointment.

However, over the years, the relationship between the two became tetchy, with the now-suspended NPA MD said to be pursuing an independent path on many controversial issues.

Perhaps the most controversial issues revolve around Intels, the ports logistics company with a monopoly over the highly lucrative oil and gas cargoes.

The NPA, under Bala Usman, has been arguing that Intels was not remitting revenue to the federal government and that it has also been violating the terms of the agreement it signed decades ago, resulting in revenue loss to Nigeria.

She also implemented a presidential directive that de-monopolised ports logistics for oil and gas cargoes, allowing other ports and logistics companies to be involved.

Recently, Amaechi asked NPA that all matters relating to Intels be dropped, including a case in court, a directive that is yet to be implemented.

“The honorable minister has been complaining that Hadiza is arrogant and he would cut her wings one of these days. He said she takes her memos directly to the president because she has access, and this is undermining him,” an insider in the ministry of transportation told reporters.

“The honorable minister had told us that Hadiza would not get a second term, but we were all surprised when President Buhari announced her re-appointment as far back as January — six clear months to the expiration of her tenure.

The minister felt humiliated because he was the one that was supposed to make the recommendation based on the law.”

Insiders say Amaechi had been trying to cut Bala Usman “to size” for a while, but it seemed nothing was working.

He got Akin Ricketts appointed NPA board chairman in 2020, and Ricketts immediately set out to “cage” her — at a point demanding that he be given an office space at the head office even though he was not an executive chairman.

Ricketts was also all over the media, making pronouncements on behalf of the NPA in a way that appeared to outsiders as a battle for supremacy between the chairman and the MD.

In the end, Ricketts lost out and was replaced by Emmanuel Olajide Adesoye as the board was reconstituted with Bala Usman re-appointed in January. Insiders say the development was another blow to Amaechi but he bided his time.

Amaechi eventually made headway in March when he wrote a letter to the president complaining that NPA had not remitted an “operating surplus of N165 billion to the consolidated revenue fund account (CFR) from 2016 till date”, citing information from the budget office.

He asked the president to approve an audit of the “account and remittance” of NPA for the period.

The request, dated March 4, was approved by Buhari on March 17.

Read Amaechi’s letter to Buhari Below:

“Buhari is particularly peeved anytime an issue of non-remittance is raised with him, and Amaechi understood the game very well,” a presidency insider told reporters.

“It was also the same issue of non-remittance of proceeds of assets sold by the EFCC that led to the removal of Ibrahim Magu. The fastest way to get anyone sacked by Buhari is to build an argument around non-remittance or corruption.”

Armed with presidential approval, the ministry of transportation, in a letter by Magdalene Ajani, the permanent secretary, asked the auditor-general of the federation, to appoint “reputable auditors” for the purpose.

In a response dated April 16, Adolphus Aghughu, the auditor-general of the federation, said the NPA accounts had already been audited by external auditors up to 2019 — which is up to date in the cycle.

Aghughu also said his office conducted periodic checks for the years 2016-2018 and issued “periodic checks reports” along with comments on their annual accounts and auditor’s reports.

He said with “reputable” professional audit firms already being engaged by the NPA board in line with the enabling law, there is “no justification for the Ministry to advertise and select qualified Audit firms to conduct the exercise”.

Unable to make a headway with the office of the auditor-general since the issue of audit was no longer tenable, Amechi pulled his final card: setting up an administrative panel, which he can do without needing the help of any auditors or other agencies.

“The minister felt the audit angle was not feasible but he got legal advice that an administrative panel would help achieve the same thing,” an insider in the ministry told reporters.

After perfecting the plan, he went to see Buhari on Wednesday evening, painted the picture of impropriety at NPA, and said it was important for Bala Usman to step aside so that she would not interfere with the probe.

Buhari, who was said to be very “disappointed” with the allegation of non-remittance of surpluses “at a time the government needs funds badly to meet its obligations”, immediately signed off on it.

It might have taken Amaechi, one of the very few ministers with direct access to Buhari, many years to get his wish in his cold war with Bala Usman, but he has finally won — with his reputation as an old warhorse sealed.