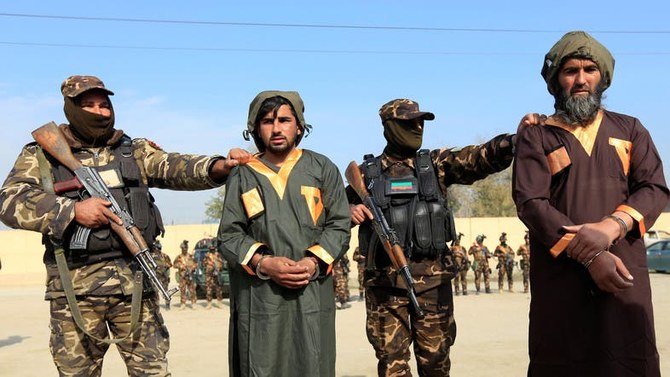 The Afghan government on Monday said that it had killed more than 60 Taliban insurgents in a series of offensives against the group after assuming control of a key US military base a day earlier.

“Backed by aerial support, the operations were conducted independently by local forces without any aid, cooperation or involvement of foreign troops,” Fawad Aman, a defense ministry spokesman, told Arab News.

“During the past 24 hours, 62 Taliban were killed, and 58 others were wounded in these operations,” he said.

The assaults covered several provinces in the south, northeast and eastern regions of the war-torn country, with a focus on the Ghazni province, to the southwest of Kabul, and the southern Helmand province where the US military formally handed over control of the Camp Antonik base to the government on Sunday.

Aman said that the operations were in response to the Taliban’s “provocations” and were aimed at “destroying their planning centers, used for attacking government forces.”

He declined to share the exact number of casualties suffered by the Afghan forces during the clashes. However, two security sources, requesting anonymity, said that more than 40 Afghan police and troops had died in the crackdown.

Meanwhile, in comments to Arab News on Monday, Zabihullah Mujahid, a spokesman for the Taliban, accused Kabul of “showing and testing its force by launching the operations on Taliban-held areas, forcing the Taliban to prevent and respond.”

He refused to comment on how many Taliban members had been killed in the attacks.

With the fate of the US-sponsored peace talks between the Taliban and the Afghan government in limbo, there has been an escalation of violence in recent weeks.

It is expected to spike in the coming months as US-led troops prepare to leave Afghanistan by Sept. 11, amid fears of the country descending into another civil war.

By formally ending its most protracted conflict in history, which Washington started in late 2001 by ousting the Taliban from power, the US military began withdrawing the remaining 2,500 troops from Afghanistan on Saturday, based on a directive issued by American President Joe Biden last month.

All foreign troops were expected to exit the country by May 1 — the original deadline set by the Taliban before signing a landmark deal with Washington in Doha, Qatar, more than a year ago.

The Taliban have blamed Washington for violating the key condition of the Doha accord, which also pushes Kabul and the Taliban to hold talks and draw a political roadmap for a future government in Afghanistan.

Based on the deal — which also required the Taliban to cut ties with Al-Qaeda and other militants and not use Afghan soil to launch attacks on any other country, including America — the insurgents had halted attacks on foreign troops, but not on Afghan forces.

In comments to reporters last week, Afghan spy chief, Ahmad Zia Saraj, said that the Taliban had ramped up attacks by 24 percent since the Doha deal was signed, highlighting a spike in violence after Biden extended the troops’ presence to Sept.11, the 20th anniversary of the 2001 attacks on US soil by suspected Al-Qaeda members.

The same year, US troops invaded Afghanistan and ousted the Taliban from power for refusing to hand over Al-Qaeda leaders, which Washington accused of staging the twin tower bombings.

In a statement on the 10th anniversary of the raid that killed Al-Qaeda chief, Osama bin Laden, Biden said that the US would “remain vigilant about the threat from terrorist groups that have metastasized around the world.”

“As we bring to an end America’s longest war and draw down the last of our troops from Afghanistan, Al-Qaeda is greatly degraded there. We will continue to monitor and disrupt any threat to us that emerges from Afghanistan,” he said.

Taliban spokesman, Mujahid, however, said that “the threat to America is clear,” adding: “We have repeatedly said and want to say again that we will allow no side to harm from Afghanistan the near, the far countries and the United States.”

“This (future threat posed from Afghanistan) is a propaganda for the continuation of occupation and keeping of the troops here,” he told Arab News.

He added that the Taliban were “willing to settle Afghanistan’s more than four decades of crisis through talks,” provided “Kabul shows sincerity” after the departure of foreign troops.

Washington’s withdrawal has created concerns both at home and abroad that the Taliban may seize power by force again and step up their attacks on the Afghan government, which has long relied on the US for financial, logistical and defense aid.

Ghulam Wali Afghan, a lawmaker from Helmand, a part of the Taliban’s main bastion, said that the insurgent group had “increased pressure on Helmand and there is a risk it will fall.”

“With the withdrawal of foreign forces, they will gain control of towns, highways and provinces such as Helmand. The government does not have the means to supply and provide aid (to the troops) on the ground,” he told Arab News.

Retired Gen. Attiqullah Amarkhail agrees. “Afghan forces were vulnerable to Taliban attacks due to lack of coordination, the prevalence of corruption in the system and absence of military doctrine,” he said.

“We have sufficient troops, which is unprecedented in our history, but those factors will play a big role in the future war. There is disunity in government on a peace plan, like other matters, while the Taliban speak with one voice,” he told Arab News.

Amarkhail added that Kabul needed to convince the US that “without putting pressure on Pakistan to persuade the Taliban to join the peace talks,” Washington’s rivals such as Iran, Russia and China will consolidate their influence in Afghanistan.

“But America cannot push Pakistan much either because Russia has managed to establish heavy influence in Pakistan, and if America loses Pakistan, then it will lose its presence in the region to a large extent,” he said.