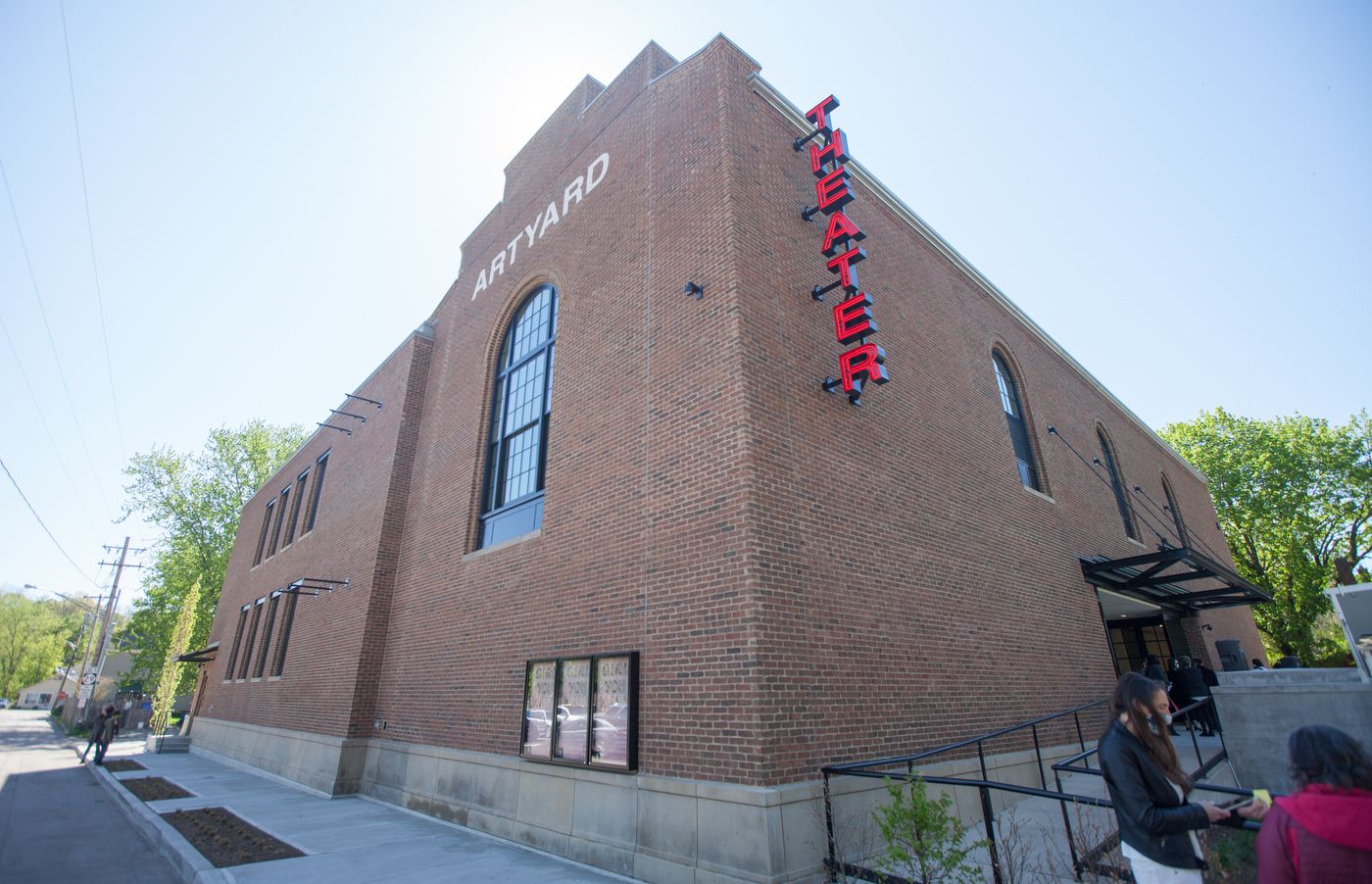 The founder and executive director of a renowned contemporary arts center in New Jersey is guided by an overarching mission: to incubate creative expression and catalyze collaborations that reveal the transformational power of art to the greatest extent that she can.

Jill Kearney took a major step in advancing this mission on May 1, upon which date ArtYard celebrated the opening of a new, larger arts complex at 13 Front St. in Frenchtown.

The 21,000 square foot building, built at the site of the former Kerr’s Chickeries hatchery building, contains both an extensive art exhibition space and theater for musical performances, film, poetry and dance. The facility is close to double the size of ArtYard’s original location at 62A Trenton Avenue in Frenchtown, which Kearney is retaining and will use to expand the organization’s residency program.

“The next phase of our development is expanding our residency program, which … we’re beta testing with a partnership with Mikhail Baryshnikov’s Arts Center in New York,” Kearney said.

“And we anticipate partnering with like-minded arts organizations and bringing them to ArtYard and giving them residency space and workspace for rehearsal and construction of art and collaborations with our community.”

The size and scale of the new space is “significantly larger” than the old, benefiting the organization in a multitude of ways, according to Kandy Ferree, managing director of ArtYard. 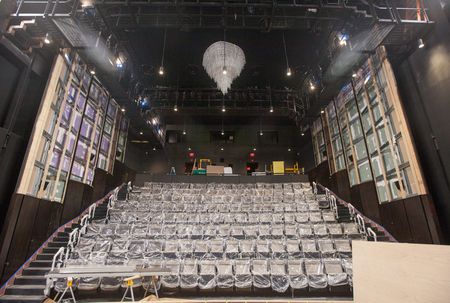 “We’ll be able to accommodate larger pieces and sculptural pieces that we might not have been able to get into our (first) building,” Ferree said.

“We also have a vertical reciprocating conveyor that allows us to take things from the first floor to the second floor … and the second floor gallery has very, very tall ceilings and a beautiful, clear story at the peak of the roofs.”

The handicap-accessible theater included in the new space boasts 30 more seats than the one in the original location, as well as city-like theater lighting and a large backstage area.

“At our (prior) space … We had some lighting, but it was very minimal, and we had no theater rigging or catwalks, all of which are there,” Ferree said. “So the types of shows, the sophistication of the offerings, and the technical specifications we are able to accommodate in this new space are significantly better.”

The inaugural exhibition of the new space is titled Girl You Want, curated by J. Vanessa Lyon. The exhibition examines what girling looks and feels like through a range of representational strategies, including portraiture and speculative narrative.

Programming at ArtYard this year will harness the theme of “a year of mending,” and aims “to heal the rifts and traumas of the last year,” according to Kearney.

These programs include an exhibition spearheaded by the grandson of a Hiroshima survivor who is partnering with the grandson of a Manhattan Project scientist on an installation that addresses intergenerational trauma, the outdoor display of five monumental sculptures by South African artist Ledelle Moe that evoke fallen monuments, and an outdoor lantern festival and dance performance related to the refugee experience.

All of these events and more will adhere to strict COVID protocols instituted at the space. These include mask-wearing requirements, limited seating, the implementation of sanitation stations at all doorway entrances, and the installation of a redesigned HVAC system that increases the frequency of external air exchange and reduces the velocity of air coming out of ducts.

As the epidemic continues, the arts center will be continuing to offer programs both virtually and outdoors — the success of which compelled Ferree to label COVID a sort of “blessing in disguise.

“It pushed us, creatively, beyond what we might otherwise have done, and has now opened up those avenues for us that will continue to be part of our programming,” Ferree said. “This team and the creative team was remarkably agile and flexible in the midst of COVID so that we did not miss a beat.”

The organization’s willingness to adapt to meet the hardships created by the epidemic reflects its desire to be “good public health citizens,” Ferree added. But beyond adopting the role of model citizens, the ArtYard staff also actively seeks to be a model friend to the environment.

This is illustrated by the construction and components of the new space, including its LED lighting, its comparatively smaller impervious footprint and grading changes that will provide a net creation of 50,580 cubic feet of additional flood storage.

“In the event there’s a flood from the Delaware or adjacent creeks, there’s flood water storage under the building that would presumably actually help the town to not be as impacted by a flood,” Ferree explained.

ArtYard also built a chimney swift tower to replace the chimney on the abandoned hatchery building, which previously served as a home for three endangered migratory birds.

“When we tore down the old derelict factory that was there, there were birds nesting in it,” Kearney said. “And at three hidden spots in the building, if you peek through a little hole, you’ll see an artist’s representation of the festivities that are happening inside the chimney swift tower.”

Exterior elements of the new space pay tribute to the old hatchery.

“You’ll see in the building finishes, blackened steel and lots of concrete and the use of a lot of natural elements rather than fancy, shiny elements one might expect to see,” Ferree said.

In response to whether or not a location for the new space outside of Frenchtown was ever considered, Ferree responded that “there was no thought we would do it somewhere else.”

“ArtYard really sees itself as a member of this community, and really sought to get community input early on,” Ferree said. “And there was overwhelming community support when we had to go to the Planning Board and Council to get approval for the building.”

ArtYard opened its original spot in Frenchtown in 2016 after considering a wide array of different locations, including in countries across Europe and other regions of the United States.

The small New Jersey community of Frenchtown was largely selected both because it could serve as an alternative to the art hubs of New York City and Philadelphia and is also close enough to these cities to function as a bridge for artists from those regions.

Additionally, the selection of such a location was meant to benefit ArtYard as much as Frenchtown in ways that the team seeks to escalate through the opening of an additional space.

“We really see this as being en economic driver and catalyst for small river towns that were formally industrial towns or railroad towns where all of those manufacturing jobs and shipping jobs and railroad jobs are gone,”

Ferree explained. “There’s no question in our minds that the ArtYard opening is going to be a boon for local businesses and restaurants, both in the attraction of visitors to the town and the county and also in the desirability for permanent residents to want to be here.”

Frenchtown Mayor Brad Myhre labeled the opening of the space as “a huge economic catalyst for our downtown.”

“I don’t think you can’t understate its economic impact — what it’s going to do for downtown shops, and Frenchtown’s restaurants as well,” Myhre said. “I think it should bring in more people and should help them tremendously.”

He also voiced his gratitude that Kearney and her husband (co-founder Stephen Kearney) decided to open the original ArtYard space in Frenchtown, acknowledging that “they could have gone anywhere.”

“I appreciate that the qualities of our community led them to choose to invest their money here,” Myhre said.

Kearney has been a longtime resident of Bucks County and was familiar with the “picturesque” quality of Frenchtown. However, what she wasn’t previously aware of was how “extraordinarily welcome and friendly and creative and diverse” the people of Frenchtown were, stating that she“sort of just lucked into that.

“I feel like ArtYard was emitting the secret pheromone that brought everybody I ever wanted to know in my life,” Kearney said.

“Living for 24 years down a long lane in Bucks County, it was a lovely area but there was no town — no way to encounter people. But in this town, in a very short space of time, you know the hardware store owner and the café person and restaurant people, and all those people are really interested in each other’s lives and hold each other up and help each other through COVID.”

“It’s a very human scale town. You don’t really know if you haven’t experienced that how much you want that in your life,” Kearney added. “And then, you’re not going anywhere else.”

In a similar vein, Ferree underscored the organization’s desire to serve as “a communal place” for uniting “unlikely people” — a goal it seeks to accomplish by mirroring the accessibility of the Frenchtown community itself.

“My hope as someone who lives here … is it really does break down that barrier and people begin to understand that art is about creativity, incubation and collaboration,” Ferree said.

“I spent the better part of years in 25 years in philanthropy, public health and social justice work and for me being involved with ArtYard now feels like this incredible opportunity to bridge all of those worlds in a creative placemaking.”