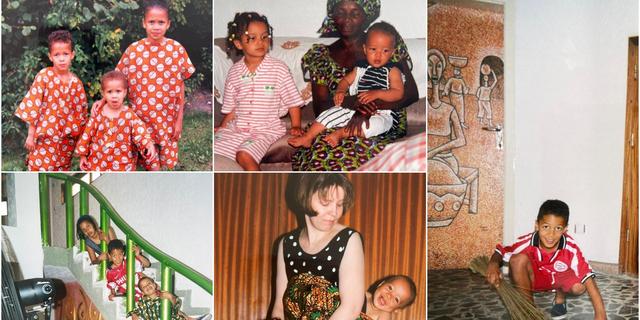 Ekong shared photos of his childhood, sweeping and being raised as a Nigerian in the Netherlands. Super Eagles of Nigeria defender William Troost-Ekong has taken to social media to prove that he is a ‘Naija boy’.

In the photos, Ekong who was born in Haarlem, Netherlands into a mixed Dutch and Nigerian family is seen in several instances as he was raised.

Ekong Naija Boy
Ekong is seen in the photos being carried on his mother’s back, sweeping the floor and wearing native attire.
Ekong added a message with the photos that said, ‘Naija Boy’

The 28-year-old Ekong was eligible for both the Netherlands and Nigeria in international football.
He opted to represent the country of his father rather than the country he was born in.

Ekong who now plays for Premier League outfit Watford Football Club is also the vice-captain of the Nigeria national team.

Ekong has not had many games for Watford since he returned from Nigeria’s 2022 FIFA World Cup double-header playoff fixtures against the Black Stars of Ghana.

Ekong is expected to return to the Super Eagles fold ahead of the upcoming friendly games scheduled by the Nigeria Football Federation (NFF).

The Super Eagles take on the El Tri of Mexico in an international friendly game at the AT&T Stadium, Arlington, Texas on Saturday, May 28, 2022.

On Thursday, 2nd June 2022 the Super Eagles will then take on Ecuador in another friendly scheduled to take place in New Jersey, United States of America.