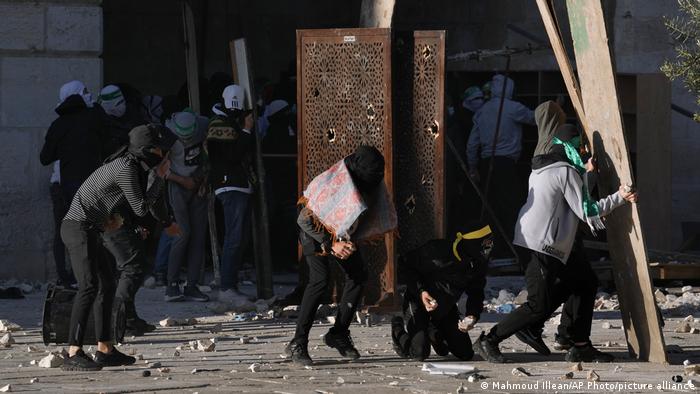 Dozens of people have been injured in fresh clashes between Palestinians and Israeli security forces on the Temple Mount in Jerusalem’s Old City, referred to by Muslims as the Noble Sanctuary.

The violence on the last Friday of the Muslim fasting month of Ramadan left about 42 people wounded, the Palestinian news agency reported.

Nigerian actors are not faithful, says Iyabo Ojo
Two killed, many injured as bus returning from Lagos market crashes
The report said there had been repeated confrontations on the Temple Mount in the past two weeks, while the security situation across Israel remained tense after a wave of attacks.

According to the police, hundreds of people, some of them masked, had provoked unrest at the holy site.

The police said stones and fireworks had been thrown in the direction of the Western Wall, a place where Jews gather to pray, and that they then entered the area to quell the disturbance.

The Temple Mount compound is the site of the Dome of the Rock and the al-Aqsa Mosque, the third holiest site in Islam.

It is also sacred to Jews because two Jewish temples used to stand there.

The compound is under Muslim administration, while Israel is responsible for security.

According to an agreement with the Muslim authorities, Jews are allowed to visit the site but not to pray there.

The Palestinians accuse Israel of trying to expand the rights of observant Jews at the holy site. (dpa/NAN)

According to Aljazeera, Palestinian Red Crescent says 42 people have been injured on the last Friday of Ramadan at one of Islam’s holiest sites.

At least 42 Palestinians have been injured in a raid by Israeli police forces on the Al-Aqsa Mosque compound in occupied East Jerusalem, the Palestinian Red Crescent said, following weeks of violence at the flashpoint site.

The unrest came on the final Friday in the Muslim holy month of Ramadan. Most of those injured suffered “upper-body injuries” the Red Crescent said, adding that 22 people had been taken to hospital.

Israeli police said forces entered the compound after “rioters” hurled stones and fireworks, including down towards the Western Wall, the sacred Jewish site below Al-Aqsa.

Police said three people had been arrested, two for throwing stones and one for “inciting the mob”.

“For the past hour, the site has been quiet and [Muslim] worshippers are safely entering [the compound],” police said.

But tensions remain high at the site in the heart of Jerusalem’s old, walled city, part of Israeli-occupied East Jerusalem.

Over the past two weeks, nearly 300 Palestinians have been injured in Israeli incursions at the Al-Aqsa compound, Islam’s third-holiest site.

Muslim leaders have been angered by a recent uptick in the number of Israeli settlers entering the Al-Aqsa Mosque compound.
The longstanding convention has been that only Muslims are allowed to pray at the compound, but, according to the Jerusalem Islamic Waqf, nearly 3,700 Israeli settlers have entered the Al-Aqsa Mosque compound over the past week to mark the Jewish festival of Passover.

Most Orthodox Jews do not pray inside the compound, believing it to not be religiously acceptable, and Jerusalem’s Chief Rabbinate also forbids prayer there. However, a growing number of Israeli religious nationalists have encouraged Jewish prayer on the site, with elements calling for the construction of a Jewish temple there.
The growing presence of the movement has led to many Palestinians fearing that Israel is seeking to divide the compound and create a space where Jews may worship.

In an apparent attempt to ease tensions, Israel’s foreign minister Yair Lapid has stressed that the government was committed to the status quo at the compound, and said that no plan to divide it exists.

However, Palestinians living in the occupied West Bank still face tough restrictions on visiting the Al-Aqsa compound, a national symbol for Palestinians, with travel being almost totally restricted for most of the year, and only allowed for certain age groups during Ramadan. In effect, this means that many Palestinians who live only miles away from East Jerusalem have never been able to visit.

Israel says that the measures are necessary for security reasons.

The fresh unrest comes on the last Friday of Ramadan, with the end of the Muslim holy month coming early next week.

Over the past two weeks, more than 250 Palestinians have been injured in incursions by Israeli police at Al-Aqsa.

Violence in Israeli-occupied East Jerusalem has raised fears of another armed conflict similar to an 11-day Israeli assault on Gaza last year which was triggered by similar unrest at the mosque.

Recent weeks have seen isolated rocket fire from Gaza towards Israel and Israeli reprisals, but no casualties reported on either side.

The Al-Aqsa tensions have come against a backdrop of violence since March 22 in Israel and the occupied West Bank and Gaza.

At least 26 Palestinians and three Palestinian citizens of Israel have died during the period, most of them in raids by Israeli security forces in the occupied West Bank.

Twelve Israelis and two Ukrainians were also killed in four separate attacks inside Israel. Two of the deadly attacks were carried out in the Tel Aviv area by Palestinians.

Palestinian fears over the status of Al-Aqsa come as Israel authorised new settlement construction in the illegally occupied West Bank city of Hebron.

On Thursday, Israel’s High Court gave the green light for the construction of a 31-unit six-storey apartment complex for settlers in the heart of the city.

The court announced its decision after dismissing a petition against the project filed by the left-wing group Peace Now and the Palestinian-run Hebron Municipality.

“This new construction in Hebron is the first in twenty years that is being carried out inside the Palestinian city, in a compound that has been occupied by the army for years as a military base and is now being established as a settlement,” said Peace Now in a statement.

Construction began on the settlement in October.

Hebron is home to approximately 200,000 Palestinians, as well as 700 or so Jewish settlers. However, 20 percent of the city is under direct Israeli control, and Palestinians living in it, or passing through it, are subjected to checkpoints and a ban from travelling on several main streets, unlike the Jewish settlers.

Palestinians have pointed to the status of Hebron, and the division of the Ibrahimi Mosque in its centre, as evidence of their fears over the future of Al-Aqsa.