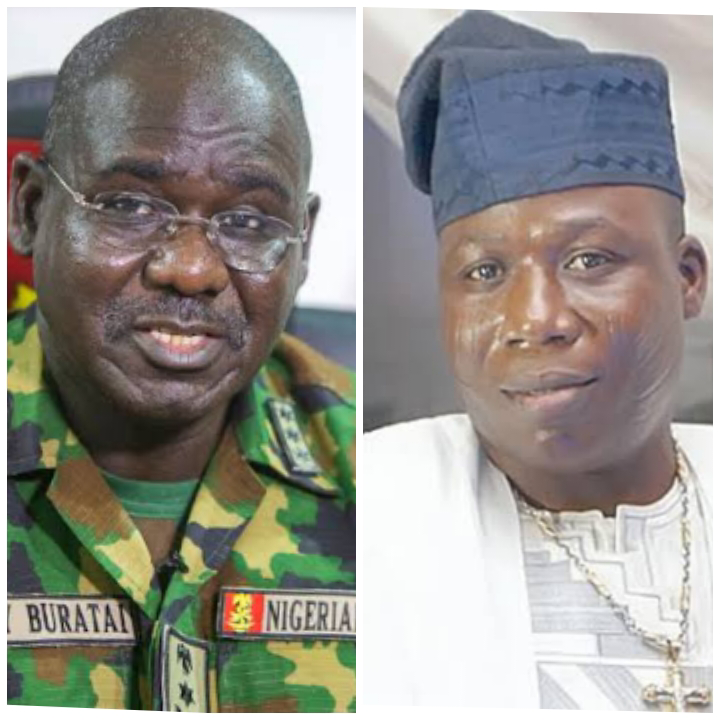 Facts have emerged on how Nigeria’s Ambassador to Benin Republic, Lt. Gen. Tukur Buratai (retd) not only aided, but was instrumental to the arrest of Sunday Adeyemo, popularly known as Sunday Igboho and his wife, Ropo, in Cotonou.

A source told Punch that the former Chief of Army Staff wrote the government of Benin Republic and insisted on the arrest and extradition of the self-acclaimed Yoruba secessionist leader. The top security source in Benin Republic said that Buratai sent a secret letter to the Benin government, through the Nigerian Embassy in that country to be on the lookout for Igboho.

That letter, according to Punch, was instrumental to the arrest of Igboho and his wife at the Cadjèhoun Airport in Cotonou, the largest city in the French-speaking country. Still, that same source said Igboho and his wife initially evaded arrest, but a travel agent was used to lure them back to the airport

“He (Igboho) was arrested in Cotonou on Monday night while he tried to travel. He was already at the airport with a passport. The immigration officers suspected the passport and so they stopped him. In the process, they discovered he was the one. He was able to escape in the course of discussion and we were grateful to God for that.

“But the travel agent called back saying the matter had been resolved. But on going back, he was arrested. He was trying to travel to Germany when he was apprehended.”

According to a top source the Nigerian government foresaw the possibility of Igboho flying to Europe through Benin Republic and planted a landmine for him there through Buratai.

After Igboho was arrested, the source said, “A lot of people made effort to resolve the matter but we discovered that the Nigerian Ambassador to Benin Republic (Tukur Buratai) was already aware and he said that he (Igboho) must be extradited.”

Buratai, who was Nigeria’s Chief of Army Staff between July 2015 and January 2021, was deployed as Nigeria’s envoy in the Benin Republic in June 2021, in spite of public outcry against his deployment.

A large section of Nigerians opposed his nomination and confirmation as an ambassador because of his gross inefficiency as Chief of Army Staff and crimes against humanity he allegedly committed;

Igboho, who had been on the run, went into hiding shortly after his house was raided at Soka, Ibadan. In that raid, two people were killed, vehicles and other property were burnt and destroyed while a cat, who the security operatives allegedly thought was Igboho, was arrested.

However Presidential spokesman, Garba Shehu, had commended the DSS for the raid and labelled Igboho as “a militant ethnic secessionist, who has also been conducting acts of terror and disturbing the peace under the guise of protecting fellow ‘kinsmen’.”

Still, Igboho had reiterated that his actions was predicated on the fact that herdsmen had been killing and raping his people, the Yoruba in the South-western part of Nigeria without the federal government doing anything to stop them and protect his people.

Igboho rose to prominence in January 2021 after he issued an ultimatum to ‘killer herders’ in parts of Ibarapa land to leave. And he had held peaceful rallies in several parts of the Southwest. His house was raided two days before a rally that was scheduled to hold in Lagos on Saturday 3 July, 2021.

The rally held as planned, though Igboho was conspicuously absent. Police used teargas and water canon to disperse the crowd that had gathered at the Gani Fawehinmi Park, Ojota in Lagos, while a 25 year old sales girl, Jumoke Oyeleke was allegedly shot and killed by the police. However the Nigeria police has denied ever having a hand in her death.

US seeking to expand its military presence in the Philippines, Why?