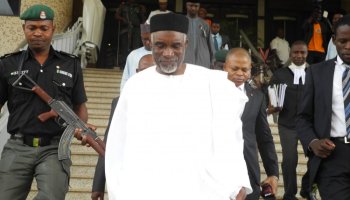 A Federal High Court in Abuja has rejected a “no case” submission by former Adamawa State governor, Admiral Murtala Nyako (retd.), his son, Abdulaziz, and others being tried for their alleged complicity in the diversion of about N29 billion public funds.

In a ruling on Monday, Justice Okon Abang held that the prosecution had established a prima facie case against the defendants to warrant their being called upon to enter a defence.

The judge averred that having scrutinised the evidence of the 21 witnesses called by the prosecution and the exhibits tendered, he could not resist coming to the conclusion that the defendants had some explanations to make on the charge against them.

“It is my humble but firm view that the prosecution has established a prima facie case against the defendants.

“Therefore, the no case submission filed by the defendants lacks merit and it is accordingly dismissed. The defendants are required to enter their defence immediately,” Justice Abang said.

The judge adjourned till October 4 for the defendants to open their defence.