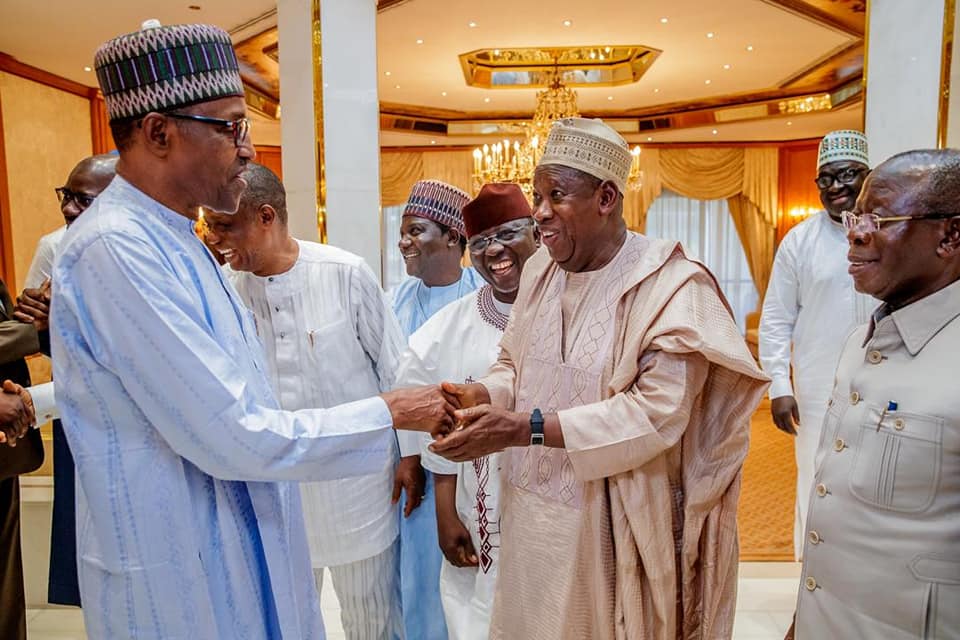 As usual, his visit pulled out unprecedented crowd into Kano streets, who lined up in peaceful disposition and waved consistently, but tirelessly at a man they so much adore with passion. Indeed, the crowd was adamant to the scorching sun and the fairly rain that drippled, as they moved towards all direction President Buhari followed. Even though part of his movement within the ancient commercial city was done by air, on Nigeria Air Force helicopter, President Buhari’s loyalists pried up their eyes hailing him as the helicopters hovered around the airspace of the Kano city.

Done with the ground-breaking ceremony, President Buhari was led to Zaria/Zoo Road, where he commissioned the N4 billion Dangi Interchange Flyover, one of the major projects initiated and completed by Governor Abdullahi Umar Ganduje’s administration.

According to the state Commissioner for Information, Malam Muhammad Garba, who chatted briefly with our Correspondent, shortly after the commissioning of the project by President Buhari, the three-layered Dangi Interchange Flyover was not only designed to reduce traffic congestion along Zaria road and other interjections, but also to add more colours to the beauty of the ancient commercial city, which is gradually transforming into a mega city under Governor Ganduje’s administration.

He noted that the multi-billion Naira project, which is one of its kind in northern Nigeria,is among major infrastructural amenities initiated and completed by the Ganduje’s administration. “You are also aware of the Bukavo Barracks Underpass, along Katsina Road and the Panshekara/Madobi Under-pass Flyover, also initiated and completed by Governor Ganduje’s administration. These are apart from numerous road projects within Kano city and the hinterlands spread across the 44 Local Government Areas.

“Indeed, this administration is very passionate and committed to infrastructural development, even as we also engage in human development and other spheres of democratic dividends that have positive impact on the lives of our people. We are also determined in completing abandoned and uncompleted projects left behind by previous administration. You are here on ground and you can count numerous projects inherited and completed by the Ganduje’s administration, including the Muhammadu Buhari Specialist Hospital and the Flyover along Murtala Mohammed Way, among many others,” he said.

Malam Garba, however, recalled the level of “malicious” criticism orchestrated by some elements in the opposition when the Dangi Inter-change Flyover project was initiated, but expressed happiness that at the end, it has become a huge success, stating that, “I can recall that some people in the opposition maliciously criticized this very project at inception, wrongly describing it as a misplacement of priority. But we are happy today that it has turned out to become a huge success appraised by not only President Muhammadu Buhari who has just commissioned it, but by even those in the opposition who once criticized the project. Indeed, this is the good result of our foresight and determination to give our dear state and the people quality leadership and the best of democratic dividends. I am also pleased to tell you that these quality projects being executed by the people’s Governor, Dr. Abdullahi Umar Ganduje, has earned him numerous awards and accolades. Few days ago, we were in Abuja where he received an Award as the Best Governor in Education and Infrastructural Development. The Award, courtesy of the House of Representatives Press Corps was handed over to Governor Ganduje by the Speaker of the House of Representatives, who candidly acknowledged his giant strides and quality leadership style in Kano state.”

Shortly after commissioning the Dangi Inter-change Flyover, President Buhari’s long convoy meandered through the streets of Kano, and headed to the Palace of the Emir of Kano, His Highness, Alhaji Aminu Ado Bayero. As the convoy moved slowly, President Buhari waved at hundreds of thousands of Kano residents who lined up to honour him. He also seized the opportunity to have a glimpse of other numerous infrastructural facilities put in place by Governor Ganduje’s administration.

President Buhari, known for his frankness made his Kano experience an issue during his brief remarks at the Palace of Emir Aminu Ado Bayero. He showered praises on Governor Ganduje for execution of quality projects that have direct bearing on the lives of the people. He, also, urged other state Governors to emulate Ganduje’s policy of continuity. The President, particularly, commended Ganduje for completing abandoned projects left by previous administrations and at the same time, initiating new projects that impact positively on the people.

President Buhari who spoke in Hausa stated that, “I am delighted over how Governor Abdullahi Umar Ganduje is developing Kano state. I am also happy over his continuity policy. I have seen a number of projects of previous administrations which he has completed. This shows that he is not wicked or malicious. I urge other state Governors to emulate the continuity policy of Governor Ganduje. I am very happy for the warm reception I received in Kano.”

In his remarks, however, Emir Aminu Ado Bayero called on President Muhammadu Buhari to intensify more efforts in tackling the issues of insecurity and the economy. He regretted that people are facing untold hardship because of high cost of commodities, insisting that government should do everything possible to control inflation.

The Royal Father who appealed to Nigerians to support and pray for the success of President Buhari’s administration, also expressed delight over the way the Federal Government is executing people-oriented projects, particularly in Kano state.

In his remarks earlier, Governor Ganduje commended the foresight of the Federal Government in reviving the rail sector. According to him, the execution of such projects was a clear indication that the Federal Governments is showing commitment in promoting commerce, improving the economy and creating more job opportunities. Governor Ganduje further stated that Kano people appreciated President Buhari-led Federal Government for initiating laudable projects in the state, which include modern correctional center, solar power station in Kumbotso, reconstruction of Kano-Kaduna-Abuja dual carriage high way, among others.

However, President Buhari’s Kano visit has continued to generate discussions and analysis within the political circle and the public dormain. Many opinion leaders believe that the accolades he showered on Governor Ganduje is not only well deserved, but a wake-up call to other state Governors to engage in execution of quality projects that stand the test of time. It is also the expectations of Kano residents that the presidential pass mark on Governor Ganduje will ginger him to do even more for the interest and welfare of the people and the overall development of Kano state, which he promised to put on the front pew of mega cities in Africa before leaving office in 2023.