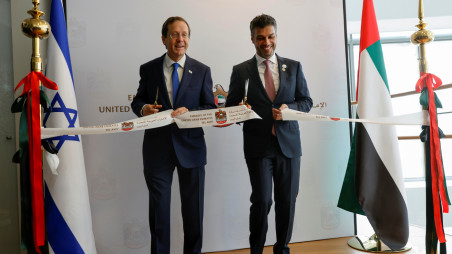 The United Arab Emirates is among a group of Arab states that have normalized ties with the Israeli regime as part of a controversial initiative brokered by the United States and condemned by Palestinians. The Emiratis, who have been particularly open about their ongoing normalization process, opened an embassy in Israel this week.

The new embassy is located at the heart of Israel’s financial hub, in the Tel Aviv Stock Exchange building.

The UAE has never been known for having an independent foreign policy. It has never stood for the rights of Palestinian people.

Historically, and recently as you’ve seen, the UAE has always aligned its foreign policy with the foreign policy objectives of Western countries like the US and UK.

This is seen by many as a sign that the two sides are highlighting the role of economic cooperation in their normalization of ties.

Last month, Israel opened an embassy in the Emirates capital Abu Dhabi, and the consulate in the UAE business hub, Dubai.
Over the past year the two sides have signed many deals, ranging from financial services to tourism.

Critics say Emirati leaders have totally abandoned the Palestinian cause for the economic and political dividends of ties with the Israeli regime.

The controversial normalization process is very much an ongoing endeavor despite Palestinian anger.

Palestinians are outraged by the normalization, which they believe is threatening their planed statehood.
The stance adopted by these Arab governments seems to be helping the Israeli regime to move out of deep isolation in the West Asia region; Palestinians say those Arab states are stabbing them in the back.

The Palestinian Resistance movement, Hamas, says this week’s embassy opening “marks an insistence on the great sin against the people of Palestine, and all the nations of the region”.

It warned that the move would encourage the regime to press ahead with its crimes in the occupied territories and the besieged Gaza Strip.

Observers warned that the embassy opening just weeks after Israel’s deadly onslaught against the Gaza Strip and the escalation of the regimes violations in the occupied West Bank indicates that some Arab states are no longer bound by the Palestinian cause.
Palestinians have been fighting an uphill battle against the Israeli occupation for decades. Things are perhaps tougher today as several Arab states are undermining the Palestinian cause by moving closer to Israel.

The Palestinian issue was once a unifying cause among Arab countries but Israel, backed by the United States, has apparently managed to divide the Arab states more than ever.

Israel has been especially thankful to the United States, for pushing the UAE, Bahrain, Morocco, and Sudan, to normalize ties with Tel Aviv.

America has always been a staunch ally of Israel yet former US President Donald Trump was perhaps the best friend of the Israelis in a very long time.

His extremely pro Israel decisions and policies are still impacting the lives of people in the West Asia region, especially those in Palestine.

The Palestinians say they have come to the conclusion that America’s heavily biased stance leaves no room for any further US mediation role regarding Palestine in the future.