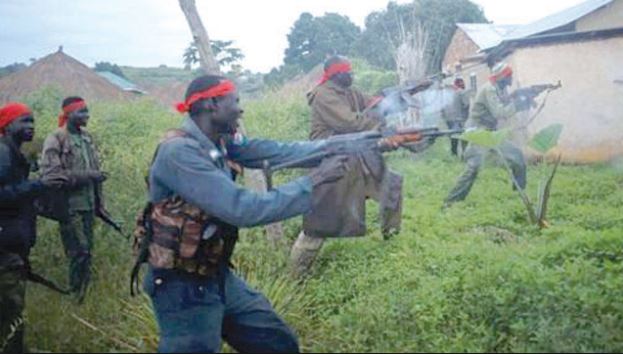 The Federal Government, and some state governments, like Kaduna, say they neither negotiate nor pay ransom to bandits. But government being incapable of preventing the mass kidnap of citizens, especially school children, and inability to rescue them, leaves families and friends with no choice but to negotiate with the bandits and pay hefty ransom.

So, does it really matter who pays ransom to the bandits; whether it is government, the so-called state actors; or the families of the victims, the hapless and helpless non-state actors?

At this point, let me commend the exceptional courage of Governor Ahmed el-Rufai of Kaduna State, a state where bandits are running riot, forcing schools to shutdown, controlling the highways and forests, and deciding whether the citizen can sleep at home with one eye open, or in the forests under the rains with two eyes open.

In such exceptional circumstances, it truly requires a man of immense courage to continue calling himself His Excellency, the Executive Governor and Chief Security Officer. But for the Constitution, he would have seemed more like a strutting impostor complete with an hired security convoy and tenancy in the Government House.

In fact, with bandits appointing themselves tax collectors, policemen, judges and governors of territories in the country otherwise ruled by President Muhammadu Buhari, the question: who is the Governor of Kaduna, Katsina, Borno or Niger State? may elicit the response: “Which of the governors; the politician or His Excellency, the bandit governor?”

Come to think of it, if Communication Minister, Isa Pantami, can claim that he has repented from his call that Christians be killed and, therefore, deserves to remain in office, what stops bandits proclaiming they have repented and, therefore, having the right to contest elections and hold office? More so, when they have neither been tried nor convicted.

On the other hand, the bandits can deny ever being bandits or to have resigned from banditry. This will very much be like Ms. Lauretta Onochie, President Buhari’s Personal Assistant on New Media, who in a desperate bid to be cleared as an electoral commissioner, denied the ruling All Progressives Congress, APC, even before the cock could crow thrice.

Who knows, they can even go to court to swear an affidavit that they are no longer bandits. If they do so, they will be right in the context of the lessons Onochie is teaching young minds in Nigeria that political partisanship is like a uniform you can wear or remove at will.

There are efforts, even if little, being made by some governors to limit the bandit attacks. Ironically, these are the leaders constantly under attack by politicians and their hacks, especially in the unfeeling Presidency. This is why Benue governor, Samuel Ortom, is consistently under attack for the crime of resisting the barbarism being visited on his people by mindless bandits and terrorists.

Ironically, the bandits are shifting attention from Benue to neigbouring Plateau State whose governor, Simon Bako Lalong, had claimed the attacks on his neighbour was because it enacted the anti-open grazing law. That is the problem with outlaws; they are incapable of distinguishing between friends and foes.

When governors of the South-West took the basic step, like Governor Ortom, by asking herders to leave the government reservation forests and stop grazing cattle across farm lands and roads, they immediately came under attack by federal authorities and groups which ordered the herders to ignore the governors and be lawless.

In fact, the rubber stamp Senate President, Ahmed Lawan, who is incapable of fixing a leaking roof, claimed the governors are the source of conflicts in the region. I am sure that such a redundant fellow, whose posturing on the electronic transmission of election results turned out to be fake, cannot help fix the country.

The absence of a truthful, reliable and capable leadership, has led to the marked rise of banditry, terrorism, food prices and general insecurity in the country. To use the elegant words now in season, there are now many ‘ungoverned spaces’ in the country. In 2020, nine of the 34 local governments in Katsina State were either under the control of bandits or hotly contested by them. These included Faskari, Dandume, Sabuwa, Dan Musa, Batsari and Safana.

Given their effective control of large swathes of land, bandits can easily dictate elections in such places. No voter would dare vote against candidates anointed by ruling bandits. My analysis is that if bandits control so many local governments, then, if they so wish, they can win elections into State Houses of Assembly, the National Assembly or as governors.

If good people can come to power, so can bandits, whether repentant or not. The fact is that apart from politicians facing criminal charges for looting public funds, it is not unlikely that we have criminals sitting in the National Assembly as Honourable Members or Distinguished Senators. In fact Senator Joshua Dariye, following his 2018, conviction is serving 10 years in prison.

A legislator being imprisoned is not new. Law enforcement agencies for many years suspected that Maurice Ibekwe was a leading fraudster in the country. His listed heist include a $242 million fraud in the Banco Noreste Scam and the alleged 1992 scamming of a German, Klaus Munch and his company, Firm System Organisation to the sum of $30 million.

In 1999, Ibekwe won elections as the Honourable representing Okigwe North Federal Constituency of Imo State. While in the National Assembly, his choice of House Chairmanship was, fittingly, Police Affairs. When the joke was being taken too far, security agents were nudged to charge him to court. He died in prison in 2004.

Given our opaque politics, the way the electoral system is being manipulated and compromised, including the Senate voting to stop the Independent National Electoral Commission from transmitting election results electronically, it is not unlikely that in the not too distant future, we might have a bandit or terrorist win elections as a state governor and will be addressed as His Excellency and would automatically become a member of the Governors Forum. To paraphrase the English poet and Anglican cleric, John Donne: Do not ask me for whom the bell tolls; it tolls for me and thee.