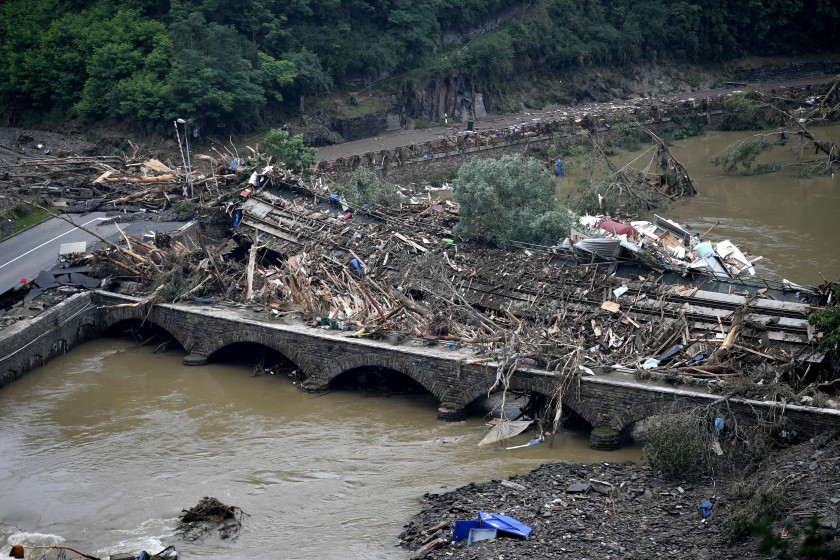 The death toll from the catastrophic flooding in western Europe has surpassed 150 as rescue workers struggled to clear up the devastation and avoid further damage.

Police in Germany declared on Saturday that more than 90 people are now known to have died in the country’s western Ahrweiler county — one of the worst-hit areas – insisting that further casualties were feared.

On Friday, local authorities announced a death toll of 63 for Rhineland-Palatinate state, where Ahrweiler is located.

Also in Ahrweiler, nearly 1,300 people were unaccounted for, although local authorities said the high number was likely due to damaged phone networks.

Regional interior minister Roger Lewentz told local media outlets that up to 60 people were believed to be missing, saying: “When you haven’t heard from people for such a long time… you have to fear the worst.”
“The number of victims will likely keep rising in the coming days,” he added.

Another 43 casualties from the floods were confirmed in neighboring North Rhine-Westphalia state, Germany’s most populous.

Long-time German Chancellor Angela Merkel, who was on a farewell visit to Washington during the disaster, has described the flooding as a catastrophe, expressing fears that “the full extent of this tragedy will only be seen in the coming days.”

German President Frank-Walter Steinmeier, meanwhile, planned to visit the town of Erftstadt, southwest of Cologne, on Saturday where a disturbing rescue effort unfolded on Friday as people became trapped when the ground gave way and their homes collapsed.

Local officials feared that some people were not able to escape the devastation, though no casualties had been confirmed as of Saturday morning.

The death toll in Belgium climbed to 27 on Saturday, according to Belgian broadcaster RTBF.

While waters were receding across much of the affected regions by Saturday, local authorities expressed fears that further casualties may be discovered in cars and trucks swept away by the floods.

In addition to the worst-struck countries of Germany and Belgium, southern parts of the Netherlands have also been affected by heavy flooding. Moreover, heavy rain in Switzerland has caused several rivers and lakes to burst their banks, with authorities in the city of Lucerne shutting down several pedestrian bridges over the Reuss river.

Many of the flooded areas remained without electricity and telephone service on Saturday,

The flash floods this week followed days of heavy rainfall which turned streams and streets into raging torrents that swept away cars and caused houses to collapse across the region.

Some parts of western Europe received up to two months’ worth of rainfall in two days on soil that was already near saturation, according to the World Meteorological Organization.

Luxembourg and the Netherlands were also hammered by heavy rains, inundating many areas and forcing thousands to be evacuated in the city of Maastricht.