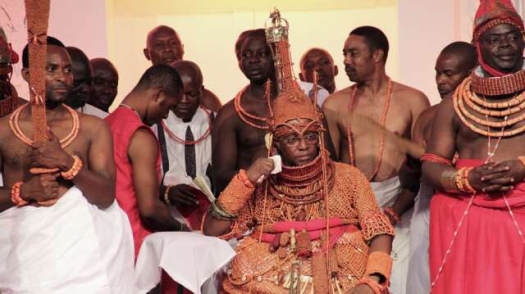 The Royal Palace of the Oba of Benin is a sacred site therefore you should not do any of these while visiting the Obas palace.

The Royal Palace of the Oba of Benin is the most prestigious site in Benin and one of the top things to see when in Benin City, Edo State. It is one of the most famous Royal Houses in the whole of Africa. It is The palace, built by Oba Ewido (1255AD – 1280AD), is situated at the heart of the ancient city of Benin. It was rebuilt by Oba Eweka II (1914 – 1932) after the 1897 war during which it was destroyed by the British. The palace was declared a UNESCO Listed Heritage Site in 1999.

It is seen as a sacred site so it has its dos and don’ts — including no wearing of black, no whistling, no pointing at the Oba or his chiefs, etc.

2. Pointing
Pointing is seen as sacred, an act with deep spiritual for blessing and cursing so pointing fingers at either Oba or his chiefs are not allowed at the Oba’s palace. It is a punishable offence.

3. Using umbrellas
During festivals, only the Oba of Benin is allowed to use an umbrella, no matter the weather.

4. Wearing black
Anyone wearing black attire is not allowed entrance into the palace because black is seen as a symbol for mourning. It is taboo for the Oba to set his eyes on the colour black.

5. Carrying palm fruits
The colour red is not allowed near the Oba’s palace at all. Hence, palm kernel in its fruit form, which is as red as blood is considered a bad omen when seen around or in the Oba’s palace.

6. Dogs
Dogs do not enter the Oba’s palace if not they will die. This is because, after the human sacrifice was abolished in the Bini Kingdom, dogs replaced humans as offerings to the gods.

7. Male visitors
The only males allowed to enter the harem, where the queen and other Oba’s women dwell, are males with royal blood, i.e. male offsprings from the royal family. Hence, male visitors are forbidden.