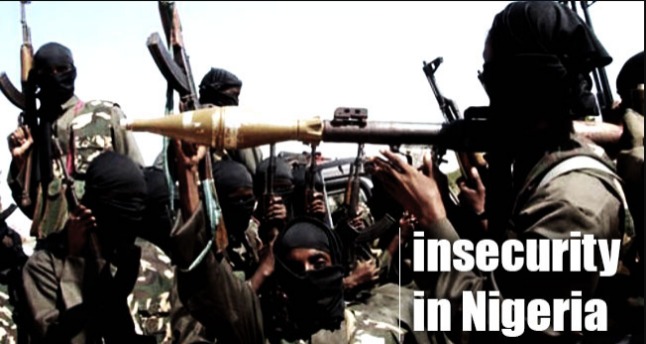 More than ever before in its sixty-one-year history as a nation, there is palpable fear that the Nigerian nation state can survive for too long under the current state of uncertainties and insecurity across the country; and government seems helpless in finding solutions to the challenges even as citizens raise concerns. 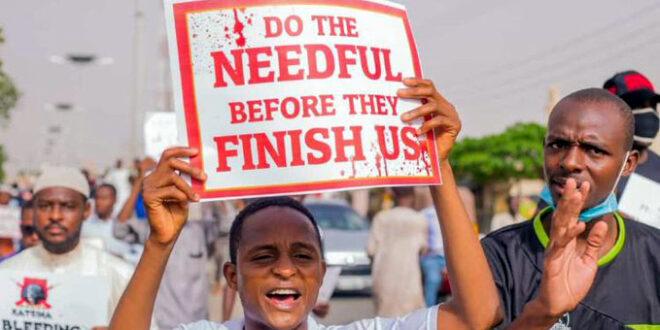 Daily, across the land, the story is the same, mass abductions by gunmen, especially of school children, have become a viable business to the extent that governors now pay ransom to abductors.

There is also the looming food crisis, as many Nigerians now wonder if there is an end in sight to insecurity in the country.

The United Nations Children’s Fund (UNICEF) estimates that 1,120 schools have been shutdown across northwestern Nigeria for fear of mass kidnappings and even where they stay open, some parents are too afraid to send their children to school.

At the midweek, heavily armed gangs who abducted more than 100 students from Bethel Baptist High School, a boarding facility in Kaduna State, capital of Nigeria’s old northern region two days ear­lier, warned that the pupils could starve unless parents supply them with food like rice, beans, salt, and palm oil, among others.

Apart from demanding a huge amount of mon­ey as ransom for the release of the abductees, they equally tasked parents and family members of the victims to buy motorcycles for them.

For many, and with government in­capable of protecting them, safety, today, is indeed, “of the Lord.”

Some Nigerians, however, contin­ue to decry the state of hopelessness, worried that the Federal Govern­ment’s approach to the lingering se­curity situation is far from desirable; a situation they say is an aberration.

Speaking with reporters, Chief Mike Ozekhome, a Senior Advocate of Nigeria (SAN) and human rights activist, came short of declaring Nigeria as a failed state, fast sliding into anarchy, where men are now stronger than institutions.

The country is on a flight to no­where, he declared, warning that: “There may be no country called Nigeria in the foreseeable future, if someone does not wake up President Muhammadu Buhari from his deep slumber and self-denial.”

The senior lawyer, who said he had written repeatedly on the secu­rity situation and offered solutions, stressed that President Buhari is “recluse, taciturn and cocooned in his world of illusion and delusion.

“He is impervious to Nigerians’ cries and gnashing of teeth. Buhari relishes it. But, hiding behind a fin­ger, as he is currently doing in the wishful thinking that he will one day wake up and suddenly discover that the insecurity challenges have vanished into thin air, is no option at all.

“He needs to urgently wake up to his call of duty, walk the talk of his campaign promises and think out­side the box. An immediate declara­tion of a national state of emergency on insecurity must be activated now. Otherwise, Nigeria may be consigned to the vehicle of historical oblivion or dustbin of history. The clock is tick­ing very fast,” he warned.

The lawyer continues: “Let’s not deceive ourselves that all is well. How many of us can still go to our farms without being killed, kid­napped or raped? We are in trouble; this is a clear and present danger, not imagination. Today, on the road we are robbed, in the schools we are kidnaped, in churches and markets we are bombed.

“In Nigeria, the president does not care about us. Does it not worry our president that his kinsmen are invading every nook and cranny of Nigeria? Sometimes, I wonder how he sleeps in the midst of this disequi­librium. Ghana refused to be called Gold Coast. But we want to remain Nigeria. We want to kill ourselves under a suffocating system that does not work, because we must be seen to live together,” Ozekhome wondered.

Dr. Law Mefor, Director, Public Affairs of Igbo Leadership Devel­opment Foundation (ILDF), also expressed concern over the current spate of security in the land, describ­ing as an aberration the current sit­uation where government rewards “perpetrators of insecurity. And, with the way the government is going about it, there seems not to be an end in sight for insecurity in Nigeria,” he also warned.

“The reward they (kidnappers) get is a reinforcer. And their colleagues in West Africa are all heading to Ni­geria, because crime pays here! In psychology, any behaviour rewarded is bound to recur.

How then can such crimes go away when the forces of demand and supply are in full dis­play? No, it cannot go away.”

Mefor noted that the unabated insecurity is why different zones are now clamouring for secession, or self-determination.

“Nigeria is just in disarray. The fault lines and ungoverned spac­es are growing and sprawling all around… The future of the Nigerian nation is, therefore, bleak, if this ag­itation persists. The government is applying too much stick and less car­rot in the strategic sense, because the government does that preferentially.

“For example, I heard a governor saying that the difference between killer herdsmen and bandits on the one hand, and Nnamdi Kanu and Sunday Igboho on the other, is that while the former is doing busi­ness, the latter have taken up arms against the state. Really? So, bandits are doing business as well as their killer herdsmen counterparts?

“Is it these same foreign herds­men who can’t speak English or Hau­sa, organising mass kidnappings, and these bandits that the governor is calling businessmen? Nigeria is simply degenerating into a criminal enterprise with those in authority justifying and glorifying such evil.

“The Nigeria union is simply no longer working for anybody. If you want to end all these separatist agi­tations, restore Nigeria to federalism as our founding fathers agreed with Britain before independence.

The 1999 Constitution has made Nigeria a unitary country with 68 items on the Exclusive List, while only about 16 items are found on the Concur­rent List. Nigeria will never move forward unless we return to feder­alism, take it or live it,” he warned.

Also speaking on the security sit­uation in the country, Auwal Musa Rafsanjani, the Executive Director, Civil Society Legislative Advocacy Centre (CISLAC), says the current situation in Nigeria puts it on the list of countries like the defunct Soviet Union, India, Malaysia, and perhaps even more closely, with the former Yugoslavia.

“These countries were large fed­erations that became dismembered because they could no longer man­age their deep divisions,” he added, warning that Nigeria is a bubbling theatre of conflicts and violent un­certainties.

“The Nigerian government, in­cluding security forces, appear to be grossly overwhelmed by the nation’s avalanche of security challenges, thus the exponential increase in violent incidents, casualty, and kid­napping figures.

“Due to the government’s ap­parent ineffectiveness in securing lives, livelihoods and ensuring gov­ernance equity, many ethnic-based groups have capitalised on the extant issues to provide safety and pursue other ambitions. For example, self-rule interests are now interwoven with achieving safety for groups in society, and the impact has been tell­ing on already depleting insecurity,” Rafsanjani said.

He said that government must re-assert its authority to check the trends of large-scale abductions, raiding of communities and dis­cussions about a possible amnesty.

For Ralph Agama, a constitu­tional lawyer, the government only needs to demonstrate the political will to deal with the men­ace, lamenting that insecurity in the country has since taken a worrisome dimension that should trouble everybody.

A situation where citizens can no longer move around freely, he said, does not au­gur well for Nigerians, even as he expressed optimism that the na­tion’s “politicians will do the right thing by engaging those behind this criminality.

“A situation where a renowned cleric like (Sheikh Abubakar) Gumi will be seen dining and taking pho­tographs with bandits and even de­manding ransom (and amnesty for them), shows clearly that those be­hind this criminality are well known to the power that be and should be taken headlong.”

Kunle Adegoke, another Senior Advocate of Nigeria (SAN) and hu­man rights advocate, believes in the power of prayers for the country to overcome the prevailing state of in­security.

With the rising rate of criminality in the land, there seems to be no end in sight yet, he stressed, describing as quite scary, “The way abductors conduct their nefarious business. The business has become too profitable for those engaging in it to find it dif­ficult to swell their ranks.”

Chief Goddy Uwazurike, Presi­dent of Cultural Credibility Devel­opment Initiative (CCDI) and former president of Aka Ikenga, an Igbo so­cio-cultural group agrees, in a chat with SATURDAY INDEPENDENT, that there is no end in sight as far as insecurity in Nigeria is concerned.

“The reason is very obvious. If you carry a gun, including an AK47, and you are not a herdsman or bandit, you could be shot and, if you are lucky, you will just end up in prison. If you are a member of the herdsmen clas­sification, you will be excused. If you are a bandit, all will respect you. So, this selective enforcement of the law is a clarion call to insecurity.”

Adewale Adeoye, Executive Di­rector, Journalists for Democratic Rights (JODER), believes insecurity may continue to worsen the already endemic level of corruption in Nige­ria, just as the poor adherence to the rule of law, favouritism, political and economic exclusion, disobedience to court orders, and state sponsored in­vasions of private homes and killing of innocent people.

However Ayo Opadokun, a chief­tain of the National Democratic Coalition (NADECO), strongly be­lieves restructure the country is the only way to address the challenges confronting her.

He also called for the discontinuation of a centralised policing is to allow states and local government areas to enforce both their laws and order in their respec­tive domains.

As a way out of the challenge Raf­sanjani agrees with Opadokun that government must shift from a hard­line and standby offensive against conversations and allow room for dialogue.

“Agitating groups need to see the government put action to words in securing lives and investments. The relevance of many self-imposed re­gional group leaders will decline if the government delivers good gover­nance.

“This also includes promoting all forms of inclusion and balanced public-good delivery, (while) ensuring peace and security, and providing an enabling environment for people to advance their ambitions within the legal ecosystem.

Although Nigeria’s state failure is largely debatable, it is abundantly clear that the current dynamics reflect a steady journey towards a violent and unsurprising halt,” he said.