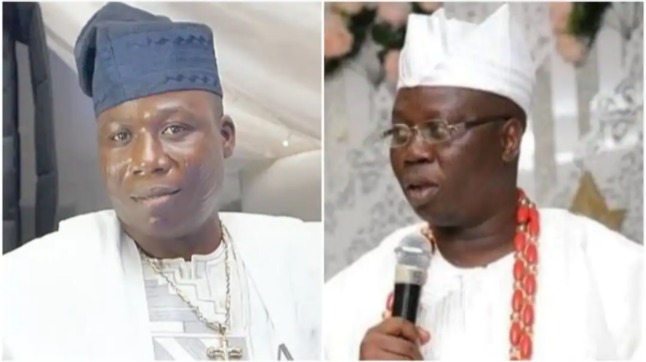 The Aare Onakakanfo of Yoruba land, Chief Gani Adams, has said most of the methods being adopted for the actualisation of Yoruba Nation by the self-appointed freedom fighter, Sunday Igboho, are wrong. Gani Adams said this in a video while addressing a gathering.

According to the Yoruba High Chief, Sunday Igboho had employed more of propaganda in the struggle for self-determination.

Adams faulted Igboho’s threat to forcefully reopen the borders, adding that claims that 1,000 policemen would not return if they invaded his house was uncalled for.

In his words, the Aare Onakakanfo expressed displeasure that things which should be kept secret were being uploaded on the social media.

However, he appealed to Obas, governors and leaders of the Yoruba race to rally round Sunday Igboho and save him from being killed.

His words: “I beg the Ooni of Ife, the Alake of Egba and all other Yoruba leaders. If a son offends his father, the father will forgive him. Let us unite to use another method for our liberation. We are not saying we should adopt Sunday Igboho’s method.

“Most of Sunday Igboho’s method are wrong. I told him that his methods are wrong. But God has used him on the agitation for Yoruba Nation. He has played his own role and he will still play more roles. We should not let him be killed or persecuted.

“As the Aare Onakakanfo, I am begging you. Assuming he and his followers had not insulted me before, you will say that is why I’m saying this. But a leader without the spirit of forgiveness is an enemy of God. I beg the governors too.

“Sunday Igboho should caution his talkative followers so that they won’t put him into trouble,” he said.

He recalled how he was put into trouble by OPC members years back, saying Sunday Igboho is now at that stage he left behind as a youth many years ago.

“I told him sometimes ago that those people surrounding him are agents of a politician in Lagos. I told him it is better to train your trusted soldiers than to hire mercineries who will later go for the highest bidder.

“You supporters, you have done enough. Don’t cause more damages to this freedom fight. Let the elders wade in. Even if any Oba or leader talk against you, don’t abuse them. Let’s begin to preach our gospel to win more souls.

“You said you wanted to go and open border. That will be the beginning of war. You don’t need to say that. It will be counterproductive.

You don’t have war materials, you were molesting the Army, counterproductive. You said if 1,000 policemen visited your house, hardly will 100 return. You don’t need all that. Propaganda should not be too much in self-determination.

“I beg all Yorubas, let’s rally round him and support him.

“At this position I am now, I can’t be jumping up and down like him. But any statement I issue is more powerful than that in 10 years. I sit on a strategic institution in the entire Yoruba and I must be conscious of my behaviours so that I will not disappoint the institution. The institution has been in existence in the past 500 years.

Adams promised to stand with Sunday Igboho, the same way some Yoruba leaders stood up for him during his ordeal in 2001.