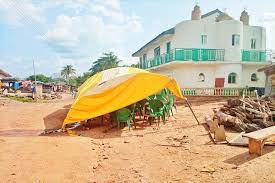 An Osun Magistrates’ Court sitting in Osogbo on Thursday remanded masquerade’s custodian, Fashola Esuleke, Chief Imam, Kazeem Yunus and others over attack on Kamarudeen mosque where a cleric was shot dead and 14 worshippers sustained injuries.

The Nation reports the police arrested the parties and attempted to arraign them on Friday, 2nd July 2021 before Chief Kayode Esuleke reportedly slumped, stalling the trial.

Police prosecutor, Mr Taiwo Adegoke, announced the appearance to the court when the State Principal Counsel, Moses Faremi, from the Ministry of Justice, told the court the state was interested in the matter.

His request to take over the matter was granted by the court.

Faremi prayed the court to grant him 24 hours to collect the case file and understudy it before arraignment of the defendants.

He explained: “Fashola Esuleke, Kola Adeosun and Idowu Abimbola were charged for murder while Kazeem Yunus, Salawu Jimoh, Alarape Sulaimon Akanbi and Raimi Saheed were charged for assault on the same charge sheet which should be separated. The charge is defective, so should not be arraigned because magistrate can’t preside over capital offences.”

The Counsel for the masquerade’s custodian, Kehinde Abioye, argued that bail is at the discretion of the court, noting since the defendant had appeared before the Magistrate, the court will determine whether they should be remanded in Police custody or Ilesha correctional centre.

The presiding magistrate, Mr Asimiyu Adebayo remanded all the seven defendants in police custody and adjourned the matter till Monday, July 12th, 2021 for the defendants to be brought before the court for arraignment.