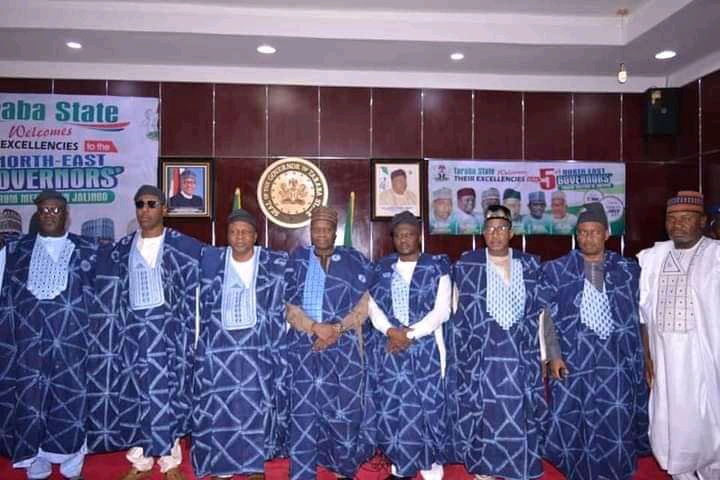 The Governors of Adamawa, Bauchi, Borno, Gombe, Taraba and Yobe States, under the auspices of North East Governors’ Forum, at its 5th meeting held in Jalingo, Taraba State has applauded President Mohammed Buhari over the general improvement of the security situation in the North East sub-region.

In a communique signed by the Chairman of the North East Governors Forum, Governor of Borno State, Professor, Babagana Umara Zulum, noted the general improvement of the Security situation in the region and calls for continuous collaboration of all the security agencies in the country to sustain the gains.

The Forum condoled with Mr. President, the Nigerian Army and the families of the late Chief of Army Staff Major General Ibrahim Attahiru and the other officers who lost their lives while on duty.

The Forum also called on the diplomatic community, partners and donor agencies supporting the region to activate the process of transiting from humanitarian to stabilization and durable solution within the region.

The Communique also reads that the gesture will ensure sustainability and give people the opportunity to help themselves out of poverty while addressing the socio-economic dimension of insecurity in the region.

“The negative impact of drugs and narcotic substances in the region and the extent to which it fuels the insurgency and other forms of criminality in the region.

It therefore calls for support in the area of stopping drug trafficking and enforcing narcotic control within the region and across the borders.

It however, expressed dismay over the shortfall in the number of applicants from the region in the recent recruitment into some Federal Agencies.

“The Forum deliberated extensively on the presentation on the Mambilla Hydroelectric Power Project and noted with dismay, that the project as important as it is, to Nigeria and the North-East sub-region, is surrounded by a lot of contractual encumbrances which have stalled its take-off and realization.

The Forum, therefore calls on the President to accord the project the desired seriousness by establishing a Special Purpose Vehicle (SPV) to address the encumbrances and bring the project to reality.

“In a bid to reposition Education in the region, the Forum has received report from the North East Council on Education.

It has taken the Councils’ advisory on the improvement of quality and performance of students and teachers screening and training in the region”.

The next meeting of the Forum is scheduled to hold in Damaturu, Yobe State capital North East Nigeria, on Saturday, 9th October, 2021.