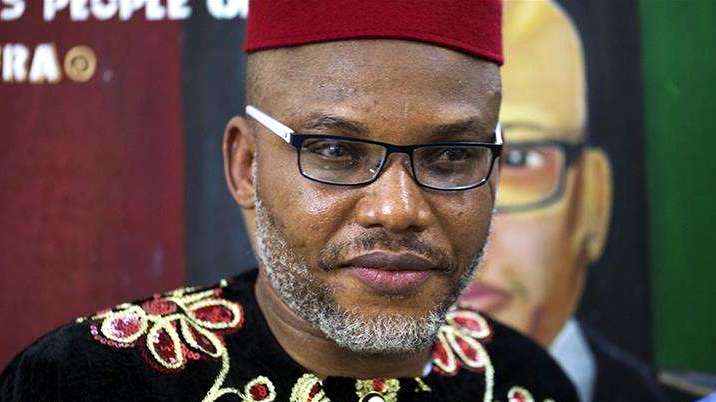 The Federal Government says a bench warrant was lawfully and judiciously procured through judicial process by a competent court of law. The Office of the Attorney General of the Federation and Minister of Justice has insisted that the re-arrest of the leader of the Indigenous People of Biafra (IPOB), Nnamdi Kanu, followed the legal process.

In a telephone interview with Punch on Friday, the Special Assistant to the Minister on Media and Public Relations, Jibrilu Gwandu said Kanu’s lawyer was involved in the judicial process that led to the grant of his earlier bail.

It would be recalled that the IPOB leader, who is facing an 11-count charge of treason, treasonable felony, terrorism, and illegal possession of firearms, among others, jumped bail in 2017 and left the country.

He thereafter re-emerged in Israel and then in the United Kingdom.

Four years after, he was rearrested, extradited, and re-arraigned before a Federal High Court in Abuja on Tuesday, June 29, 2021.

According to Gwandu, “Bench warrant was lawfully and judiciously procured through judicial process by a competent court of law, whose bail conditions he breached with impunity.

“He (Nnamdi Kanu) has been represented by a counsel all through the judicial process and was never denied a right of choice of counsel or recourse to one, even when he symbolizes a proscribed association (IPOB) in law and, in fact, his association has been legally proscribed.

“So, there was no illegality in the entire process.”

Gwandu also revealed that the re-arrest and re-arraignment of Kanu were not discussed in the meeting the Office of the AGF had with the British High Commissioner on Thursday, July 1, 2021.

“The legality or otherwise of Nnamdi Kanu’s arrest was not discussed in the meeting. I sent you a press release on the issues that were discussed. The meeting was scheduled long before the arrest,” he said.

Following Kanu’s re-arrest, Pulse reported that the British High Commission said it would ‘seek clarification’ on the development.

The Commission also promised to provide consular assistance to the IPOB leader.

Meanwhile, Kanu, who was rearrested on Sunday, June 27 has been remanded in the custody of the DSS, while the case was adjourned till July 26 and July 27.