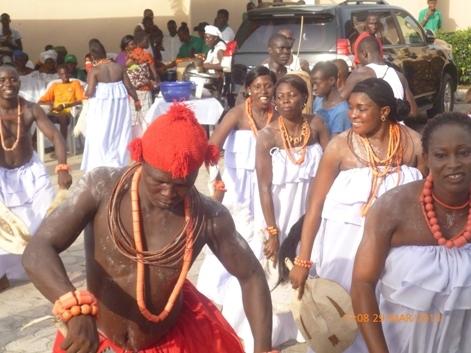 Their neighbors are the Isoko to the South East, the Itsekiri to the West, Ijaw to the South, and Ukwuani people to the North East. The Urhobos are interesting people.

They are one of those few tribes without a documented history. And this is because there is almost an absence of European records in their history.

But oral tradition tells us that the history of the Urhobo people began from Edo territory. Their migration to the various locations they now call home started at the end of the Ogiso dynasty.

Their exodus was not like that of the Israelites where the movement was once and for all, no. In the case of the Urhobo peoples, it was various groups: each moving at its own pace, seeking homely territories.

Hence the twenty-four sub-groups that make up the Urhobo nation, including Okpe– the largest of them all.
With over one million indigenes and hundreds of communities scattered across Delta state, the Urhobo ethnic group is believed to be one of the major ethnic groups in Nigeria.

And though they’re the majority in Delta state, they are not the only tribe inhabiting the state.

Owing to the nature of the environment they occupy, which is very close to the surface of River Niger, most of their histories, mythologies, and beliefs are water-related.

Thus the two-day annual Ohworu festival in Evwreni, the southern part of the Urhobo area where the Ohworhu water spirit and the Eravwe Oganga are displayed.

Also included in the heritage of the Urhobo people are the annual fishing festivals that include masquerades, fishing, swimming contests, and dancing.

The king in an Urhobo clan or kingdom is called the Ovie. His wife, the queen is called Ovieya, and his children Ọmọ Ovie (child of the king also known as prince and princess).

But there are few exceptions to this, and examples of such are the Okpes that call their traditional ruler “Orodje”, Okere-Urhobo calls theirs “Orosuen”, Agbarho uses “Osuivie”, Orogun uses “Okpara-Uku” (mainly due to their proximity with Ukwuani people).

However, being descendants of the same ancestors, most of their customs and traditions are similar and in certain areas, the same; such as the breaking of the kola-nut and the donation of cash to wedge the kola-nut presentation, prayers and blessing pronounced before the sharing of the kola and drinks, payment of bride price, burial rite e.t.c.

It cannot be denied that the traditional marriage rite of the Urhobo people is not unique in nature.

Traditionally, when a suitor is interested in an Urhobo maiden, he courts her. And once she agrees to marry him, the marriage begins.

Different from other ethnic traditions where the bride would first inform the father of the intentions of the groom, in Urhobo culture, the opposite is the case.

She would first inform her mother who, of course, is her primary guardian, and the mother would in turn after getting the necessary information, go to the father to inform him of the situation at hand.

The father would, in turn, ask the young man to be invited.

On the first visit of the groom-to-be, tradition demands that he comes along with a bottle of gin to introduce himself formally.

On a later date, as agreed by the father, the groom would come again; but this time around, he would be coming with his parents and with few other close relatives that will speak on behalf of their son.
According to the Urhobo tradition, this is known as “Ghore-Etse” which simply means to knock.

Formal approval for marriage is given by the bride’s parents or whoever is representing the bride’s family and traditional rites of pouring the gin brought by the fiance as a libation to the father’s ancestors to bless them with health, children, and wealth.

Belief
“Ọghẹnẹ” (Almighty God) is the main focus of the Urhobo traditional religion. He is recognized as the Supreme One’ Edjo and Erhan (divinities) are recognized as well. And to them, these two deities are regarded as personified attributes of “Ọghẹnẹ”.

The Urhobo also worship God, with (white chalk). If an Urhobo feels oppressed by someone, he appeals to Ọghẹnẹ, who he believes to be an impartial judge, to adjudicate between him and his opponent.

Classified into four main categories, Urhobo divinities, which probably coincide with the historical development of the people are Guardian deities, War deities, Prosperity deities, and Fertility and Ethical deities.

However, it is important to note that the fundamental factor and manifestation of all deities in the belief system of Urhobo are “Ọghẹnẹ” (Almighty God).