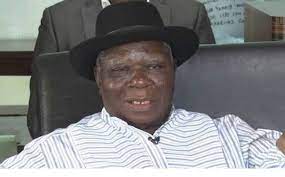 Clark says the presence of five states in the southeast and six in other regions is an injustice against the people of the southeast. An Ijaw political leader, Edwin Clark, has identified injustice and nepotism as the reasons the Federal Government struggles to rule Nigeria cohesively.

The 94-year-old politician said unity is a scarce commodity in Nigeria, adding that lack of unity is responsible for the distrust and heightened suspicion in many parts of the country.

Clark said this while addressing stakeholders at the south-south zonal conference in Port Harcourt, on Friday, June 25, 2021.

He said, “Unity in this country today is unfortunately a scarce commodity despite the fact that unity is one of the four cardinal points contained in our country’s motto, which is unity and faith, peace and progress.

“Our nation has never been so disunited, as we are today. There is so much distrust. We suspect one another’s next move. No nation can survive with such a level of distrust. And the major cause of disunity in the country today is inequality.

“You do not expect me to live in unity with someone who is oppressing me, and treating me as though I am a second-class citizen in my own country. This is unacceptable.”

Clark also said that the presence of five five states in the southeast and six in other regions is a form of injustice against the people of southeast.

He said the southeast is considerably the most disadvantaged region in the country, adding that the people of the region are victims of inequality.

This according to him is responsible for several agitations in the country.

He said, “South-east geopolitical zone has five states, while other zones, the south-south, the south-west, the north-central, the north-east, have six states each. In fact, the north-west has seven states, what injustice against a people.

“Look at the northernisation policy going on in the country. Appointments are skewed in favour of the north, in total disregard to the feelings of other areas. Key positions in the ministries, the Nigerian National Petroleum Corporation, customs, police, you name it, are all given to northerners.

“There are 17 security arms, 14 of them are headed by northerners. Yet one expects that there shall be national unity. Of course, it will not be possible. There must be dissatisfaction and agitation.

“For instance, look at what is happening in the south-east today. Our critical national assets are being attacked almost every day. People are killed, maimed. While one is gravely against such a method of expressing grievance, the people are pushed to the wall.

“The south-east geopolitical zone could rightly be described as the most disadvantaged. One could not understand why the Independent People of Biafra (IPOB) will be declared as a terrorist organization, while similar organizations in the north have not been so declared.”