Speaking to Reporters, a member of the national caucus of the party said with the problems arising from membership registration, there was no way the national convention would be held earlier than October.

The party which is battling with crisis in state chapters is reportedly planning to extend the tenure of the Buni-led caretaker committee again.

Those pushing for additional time for the Buni-led committee were hinging their advocacy on the fact that the panel had yet to conclude the data capturing required to finalise the membership registration and revalidation.

Another issue before the committee is getting funds to carry out some functions as President Muhammadu Buhari had insisted that public funds should not be used for party activities. 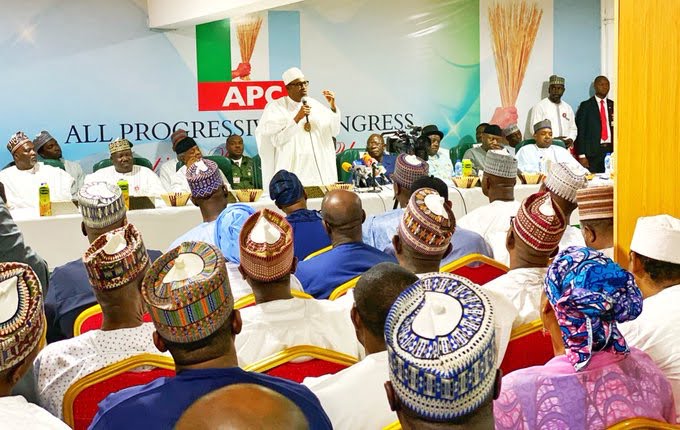 Multiple sources have also revealed that the ruling APC plan to commence the sale of forms for the various party offices “by the end of June.”

A member of the party’s national caucus, told The PUNCH that, “To be realistic, if we want to do a thorough job like I’m sure we want to, we cannot hold this convention before October.

As we speak, we are still processing the raw data collected from the states after the just concluded membership registration and revalidation. We need to have the database which is required for the national membership register.

“If you recall, that was what our party was doing in Lagos in 2014 or thereabouts when the DSS (Department of State Services) under the Jonathan administration disrupted it. This whole exercise is designed to rebuild and update the database.

“You also have the issue of the ongoing reconciliation of party leaders and members across board. No party member would want us to enter into the convention with a divided house.

To the best of my knowledge, members of the Buni-led committee are eager to conclude their assignment and move on but they cannot leave their job half done. That is where we are.”

An Enugu State chieftain of the APC, Osita Okechukwu, disclosed that fresh evidence available to him indicated that the issue of logistics had yet to be fully sorted out.

He said, “Logistics is still a major factor. I am aware that Mr President has made it clear to all party members that under his watch, public funds would not be used to fund party activities.

President Muhammadu Buhari is a stickler for respect for the rule of law and adherence to financial regulations.

“The party must look within to generate funds to fund its activities; this is a major factor. I am however confident that the caretaker committee under the leadership of Governor Mai Mala Buni remains committed to delivering its mandate.”

READ ALSO: Suspension Of Tinubu Supporters In Ekiti: APC At War With Itself – Tony

However, Spokesman for APC supporters, under the aegis of Concerned APC Members, Abdullahi Dauda, said, “We have known from the very beginning that this delay tactics will stretch to this time.

The committee was initially given six months to reconcile aggrieved members and convene a national convention but the committee added another function to its original mandate.

“The registration of members was not part of their mandate; they included it and got another six months. We can only wait to see what they want to do this time after the second six months expires.”