Former senator represent­ing Ekiti-South, Tony Ad­eniyi, has condemned the suspension of some mem­bers of the ruling All Pro­gressives Congress (APC) in Ekiti over allegations of romance with the National Leader of the party, Bola Ahmed Tinubu, ahead of the 2023 presidential elec­tion.

Adeniyi, the Ekiti State chairman, South-West Agen­da for Asiwaju 2023 (SWAGA), described the action of the party’s leadership in Ekiti as insensitive and dangerous for its survival.

Specifically, Adeniyi con­demned the recent suspen­sion of Kayode Adetifa and Jide Osho, both APC leaders in Oye Local Government Council of Ekiti State, over their sympathy for SWAGA.

The SWAGA boss said he was miffed by the alleged “in­cessant attempts by the Ekiti government to subvert the group and frustrate its activ­ities through needless witch-hunt of members”.

The APC chieftain, there­fore, cautioned the party’s leadership to refrain from what he called “actions capa­ble of crippling the electoral chances of the party in com­ing elections”.

“We condemned the per­ceived grim environment created by the Ekiti State gov­ernment before and during the Tuesday inauguration of the state’s chapter and called on leaders of the All Pro­gressives Congress (APC) to caution the governor to desist from actions that can cripple the electoral chances if the party in coming elections.”

” And as a result of these strange beats, we are calling on the National body of our party, the APC, to look thoroughly at the lingering political hide and seek of our government in Ekiti State and call this Hitler of our party to order.

A government that allows the billboard of opposition party to thrive but will not stand the one erected by its own party, is at war with itself and must be hurriedly rescued by stakeholders in APC,” Adeniyi said.

“Taking stock of activities before, during and after the inauguration, Senator Adeniyi condemned the ongoing victimisation of members of the group across the state and the recent refusal of government to allow SWAGA erect its billboards in the state despite observing due protocol.

According to the Ekiti State SWAGA boss, “SWAGA is a group within the APC, rooting as well as canvassing Asiwaju Bola Ahmed Tinubu, to show interest in the coming presidential race and also mounting support for the party’s electoral success in coming elections.” 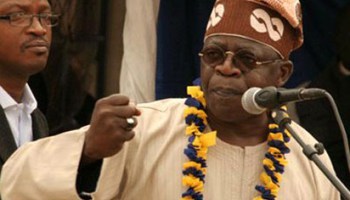 He wondered why a group set up to boost the electoral viability of APC in coming elections would become an enemy of a self acclaimed progressive within the party.

He admonished the leadership of APC to arrest the situation by calling the governor to order to ensure a united house that could sustain victory in coming political contests.

“We are abashed by the unfriendly reception of SWAGA, a wing canvassing the Leader of our party, Asiwaju Bola Ahmed Tinubu, to contest the forthcoming presidential election for the general good of our party and Nigeria.

As we speak, some members of our party who are supporters of SWAGA are going through series of frustrations and victimization by an APC government that is supposed to embrace and support them for the enormous patronage, credibility and acceptability that SWAGA is lending our party.

“Rather than accommodate and unite members, what we see daily is a seemingly deft attempt to decimate and plunder the party ahead of coming elections.

As we speak, the government of Ekiti State has masterminded the suspension of two of our key members in Oye Local Government while it has refused SWAGA to host its billboard after due process had been observed and clearance secured from the Ekiti State Signage Company.

The company had in one fell swoop, turned against SWAGA, to pull down a billboard that had been placed, just because it bears the picture of Asiwaju Tinubu, and bar us from further erection of billboards.

“It is so appalling that a government can rise against itself in greed and aggrandizement to the extent of demanding for the testicles of the father as therapy for his child’s ailment.