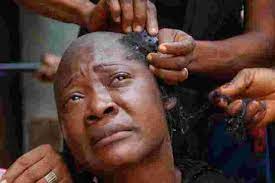 Nigeria has got a good number of cultural practices such as witch hunting, female circumcision, and a bunch of others that seem weird. Every tribe and nation is bound by certain cultural practices and traditions and Nigeria is not an exception.

Certain tribes in the country, however, have what one can refer to as weird, strange and even outrageous traditions. Weird, because in this era, it just feels totally uncool to practise such things but of course, but totally normal and acceptable for inhabitants of those places where they are practised.

1. Magun
Nigerians, like some other countries, have little or no tolerance for adultery.

Magun (Thunderbolt), black magic which is commonly used by the Yorubas, is placed in a married woman without her being aware of it either by her husband or his family so that if she commits adultery, her lover could end up losing his life or getting stuck while in the act.

This is common amongst the Igbos. A widow is subjected to humiliation to prove she has no hand in her husband’s death. All kinds of punishments are inflicted on her such as making her drink the water used in washing her husband’s corpse, shaving off her hair, and the likes.

READ ALSO:  African gods: Ala, the supreme mother of the Igbos

This is a practice among the Edos. When a man or woman is suspected to either be a witch or a wizard due to strange occurrences or deaths in the family or community. Such person is taken to a witch doctor to undergo all kinds of torture to force the truth out of them and make them confess.

This is commonly practised among the Fulanis. It is done to prove that a young man has come of age and ready to take for himself a bride.

Sharo means flogging. The young man in question is continuously whipped by another, called a challenger, but he must show no signs of pain as this is to test his endurance level and his ability to persevere.

This is practised by the Calabars. The fattening room is a room where young women are kept and prepared for womanhood. In times past, being fat is equivalent to being prosperous and all. That’s what this room is basically about.