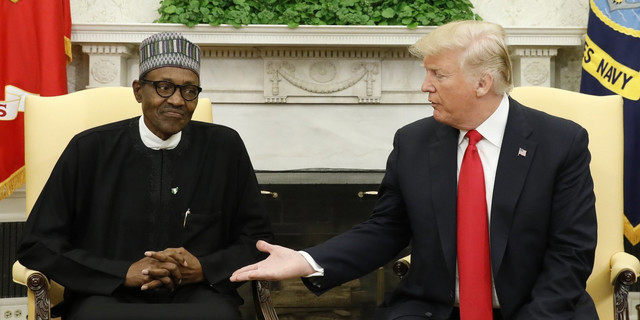 The Federal Government last week announced the indefinite suspension of the American microblogging and social networking service because it was being used for activities that are capable of undermining Nigeria’s corporate existence.

Many critics, including foreign governments, have strongly opposed the suspension as a violation of the rights of Nigerians, but the Buhari-led government has doubled down on its position.

Trump, in a statement on Tuesday, June 8, 2021, praised Buhari’s decision as to the right one.

He said, “More countries should ban Twitter and Facebook for not allowing free and open speech – all voices should be heard.

“In the meantime, competitors will emerge and take hold.

“Who are they to dictate good and evil if they themselves are evil?”

Trump, America’s 45th president, has been licking his wounds since he was banned from a long list of social media platforms, a trend Twitter started, towards the end of his tenure this January.

His social media posts following his November 2020 presidential election loss to Joe Biden were deemed as responsible for inciting a mob of his supporters to invade the U.S. Capitol on January 6.

Five people died as a result of the invasion, including a police officer who was assaulted by rioters, one rioter who was shot to death by a security operative, and three people that died as a result of medical emergencies.
Trump said on Tuesday he probably should have also banned Twitter when he was banned in the last days of his presidency.

He also launched an attack on Facebook CEO, Mark Zuckerberg, and continued to fan the flames of running for president again in 2024.

The tweet had been widely reported by Nigerians as harmful after the president appeared to threaten separatist agitators in the southeast region with a repeat of the civil war that killed millions between 1967 and 1970.

The Minister of Information and Culture, Lai Mohammed, said the action made Twitter’s mission in Nigeria suspicious, especially in light of its past actions considered an affront to the Nigerian government.

Millions of Nigerians are now cut off from accessing Twitter within the country’s borders after network operators were directed by the government to shut down access at 12 am on Saturday, June 5.

Other users have been skirting around the restriction by using Virtual Private Network to conceal their IP addresses and disguise their Nigerian location.

The Minister of Justice and Attorney General of the Federation (AGF), Abubakar Malami, has threatened Nigerians using VPNs to access the social media platform with prosecution but has failed to clearly outline the crime committed.

The decision to suspend Twitter has been considered by many as a backdoor policy to finally enforce a social media regulation that Nigerians have been pushing hard against especially under President Buhari.

Following the announcement of the ban, Mohammed said the National Broadcasting Commission (NBC) has been directed to immediately commence the process of licensing all over-the-top media service and social media operations in the country.

This development is expected to significantly impact the tech ecosystem in Nigeria, considered one of the country’s shining lights in the midst of years of escalating poverty, ballooning unemployment rate, and struggling economy.